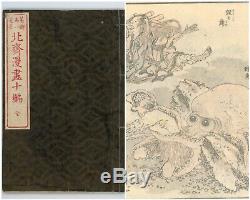 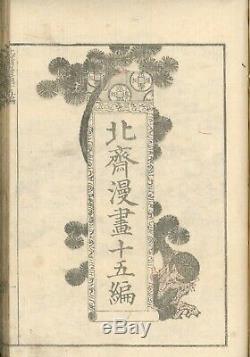 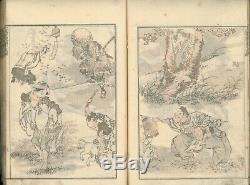 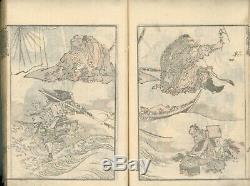 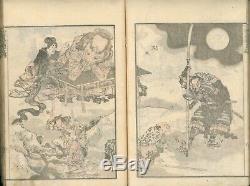 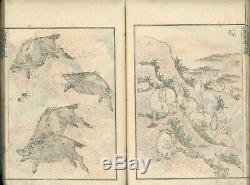 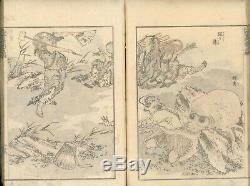 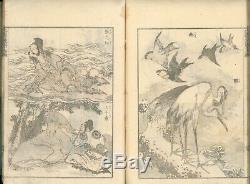 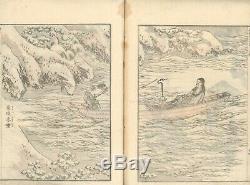 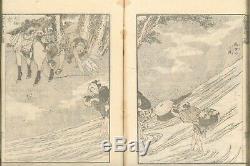 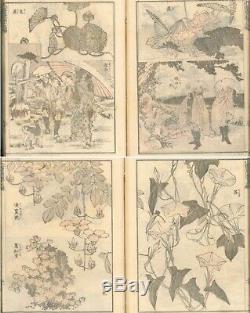 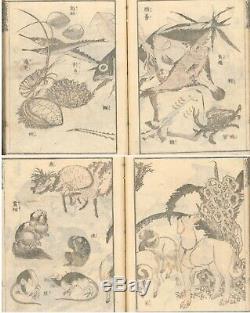 HELLO THIS IS NOT AN INFERIOR, LATE MEIJI ERA UNDD PRINTING THAT IS SO OFTEN SEEN ON THE MARKET. Own a complete and intact copy of Hokusais famed Manga Vol. Hokusai Manga: (Denshin Kaishu) Transmitted From the Gods, A Revelation of All Things. The title slip from the book reads, Katsushika Hokusai Denshin Kaishu 9 All (All is very significant, in that it marks a particular book as an early pull off the blocksto be showcased in a complete set of all 15 books of Manga). Close examination reveals fine details that are normally lost in later Meiji-era versions.

I HAVE ONLY THREE WORDS TO SAY ABOUT THIS PARTICULAR BOOK AND THIS FINAL CHAPTER OF HOKUSAIS MANGA. The intensity of light from my high-dollar scanner reveals the delicacy of the tissue thing washi paper, hence the ability to see into the opposite page. This is not nearly as pronounced when being viewed in normal lighting. IT WAS REALLY NOT EASY TO SELECT WHICH PAGES TO SCAN, SO I JUST RANDOMLY TURNED AND SHOT. THE BLOCKS WERE NOT HEAVILY INKED, BUT THE REGISTRATION IS SOLID, REVEALING BEAUTIFUL SHARP DETAILS.

IN ORHER WORDS, THE BLOCKS WERE CRISP AND CLEAN. THERE ARE CORNER THUMB MARKS, BUT THIS IS TO BE EXPECTED WHEN A BOOK THAT IS SO ADMIRED FOR A DECADE AND A HALF HAS SURVIVED THE ATTRITION OF TIME.

THERE ARE SEVERAL CREASES THAT I HAVE DONE MY BEST TO IRON OUT (NO IRON APPLIED, MIND YOU). ORIGINAL COVER AND TITLE SLIP. THE BINDING WAS PROFESIONALLY RESEWN BY ME. BREIF HISTORY OF THE MANGA. The fifteen volumes of Hokusai manga combined include roughly 4,000 pages of illustration.

The first ten volumes were published between 1814 and 1819. The publication date for volumes 13 and 14 are unknown; the final volume was published posthumously in1878, nearly 30 years after Hokusais death, but, unlike volume 14, carrying his signature. It was so popular and widely acclaimed over such a long period of time that 14 additional volumes of Hokusais manga were published during the next 64 years.

The last three books of the series, however, were created after Hokusais death in 1849 at the age of eighty-nine. Two were comprised of unpublished sketches that had been collected by the publisher and the final volume contained a selection of previously published drawings by Hokusai and works by other artists. Many art historians find this last book problematic: a spurious attempt to cash in on the continuing popularity of Hokusais artwork in the late 19th century. The item "ULTRA RARE Katsushika Hokusai Manga Vol 15 19th Century Woodblock Print Book" is in sale since Wednesday, April 8, 2020. This item is in the category "Antiques\Asian Antiques\Japan\Prints".

The seller is "dogstar_rising" and is located in Queens New York. This item can be shipped worldwide.