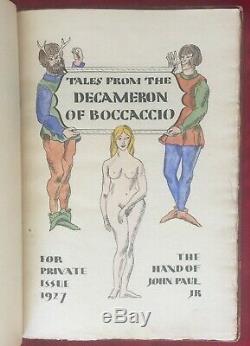 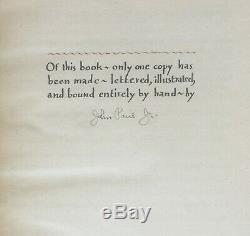 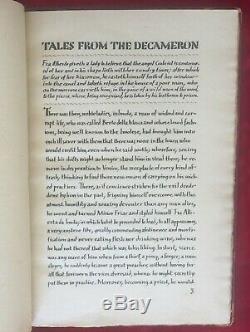 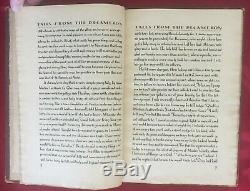 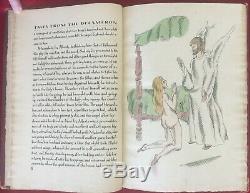 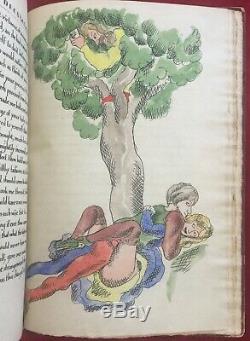 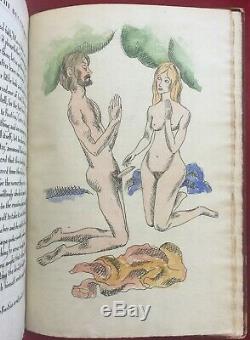 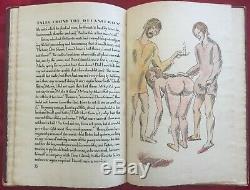 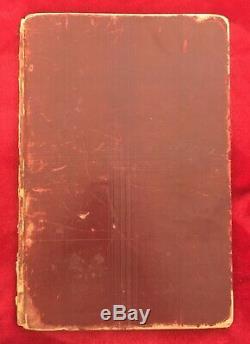 We are offering Tales from the Decameron of Boccaccio. Hand-written manuscript by John Paul, Jr. Written on first page is, Of this Book - Only One Copy Has Been Made - Lettered, illustrated, and bound entirely by hand - by John Paul, Jr. THIS IS THE ONLY ONE OF ITS KIND. This manuscript contains 3 of the original 100 Decameron tales which had been translated from the original Italian into English.

Some information about the original Tales from the Decameron: The original tales were written by Giovanni Boccaccio right after the Black Death in the 14th century and is based on a group of ten young men and women sheltered away in a villa outside of Florence to escape the plague. The tales, which were told to each other, probably to pass the time, range from erotic to tragic, some full of wit and humor, and others teaching life lessons. Here is a short synopsis of the first tale: It is the story of a wicked, corrupt and lewd man who, in secrecy and through manipulation, seduced the noble ladies of Imola, Italy. After his actions were discovered by the people of Imola, according to the story, "he removed in desperation to Venice, the receptacle of every kind of trash, thinking to find new means of carrying on his wicked practices".

In Venice, disguising himself as a priest, he outwardly lived a life of purity, sacrifice and self-denial, while secretly putting his wicked acts into practice. He somehow tricked a noble lady into believing that the Angel Gabriel told him he wanted to lie down with her in bed, but because he was an angel and didn't have a body, he wanted to use the Friar's body for this purpose. She agreed to this, and they lay together many times. There are two other erotic tales which we will not describe here. The manuscript is written in beautiful calligraphy, in the style of how it would have been written in olden times.

The written pages of the book and the illustrations are in Excellent Condition. The covers, which are leather, show considerable wear. The item "TALES FROM THE DECAMERON OF BOCCACCIO 1927 RARE HAND WRITTEN PRIVATE ISSUE" is in sale since Wednesday, April 1, 2020. This item is in the category "Books\Antiquarian & Collectible".

The seller is "propicker" and is located in Santa Clarita, California. This item can be shipped worldwide.