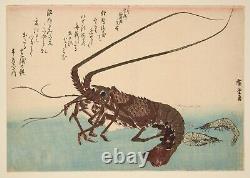 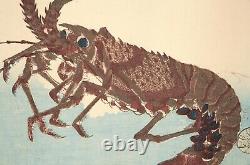 RARE Original Japanese Woodblock Print - [1832] Andô Hiroshige (17971858). Lobster and Prawn from the Great / Large Fish series. Failing to catch an Ice lobster. Is like watching a boat depart. That you wanted to board. When even the ocean appears. To steam in the noonday heat. A shrimp jumps up from below. As if from an icy spring. This print is especially desirable as the artist mixed mica flakes into the printing ink for the body of the lobster. Also included will be the published book from 1980 on this series of woodblock prints from The Metropolitan Museum of Art in New York: Hiroshige: A Shoal of Fishes. Will arrive well-packed and trackable to you CONUSA address. TITLE: Lobster and Prawn from Great Fish Series.

IMAGE SIZE: approximately 14.5" x 10". Ando Hiroshige (1797 - October 12, 1858) was born in 1797 under the name of Ando Tokutaro in Edo (Tokyo) as the son of a samurai and fireman. He became one of the greatest masters of ukiyo-e (Japanese woodblock prints), especially in the genre of Japanese landscape prints. At the age of twelve, both his parents died. Two years later, in 1811, the young Hiroshige received a chance to join the famous Utagawa painting school.

At that time, the ukiyo-e master Toyohiro Utagawa was the head of the studio. In 1812 he was formally allowed to take the name Utagawa. From then on he called himself Utagawa Hiroshige.

In the ukiyo-e literature he is usually referenced as Hiroshige Ando. The first work by Utagawa Hiroshige was a book illustration published in 1818, when he was 21 years old. Until 1830, Hiroshige created prints in the traditional style learned from his master Toyohiro Utagawa. His early commissions were book illustrations.

The Tokaido was a coastal highway connecting Edo with Kyoto, the residence of the emperor. The stations must be imagined as a kind of turn-pikes where tolls had to be paid. The stations had lodges and simple restaurants where travelers could spend the night and get a meal. The Fifty-three Stations of the Tokaido became the basis of Hiroshige's fame and commercial success. For the next twenty years he concentrated his efforts on landscape prints. The item "RARE Original Japanese Woodblock Print -1832 Hiroshige -Lobster & Prawn + Book" is in sale since Friday, April 3, 2020. This item is in the category "Antiques\Asian Antiques\Japan\Prints". The seller is "willpreachforfood" and is located in Saint Louis, Missouri. This item can be shipped to United States.