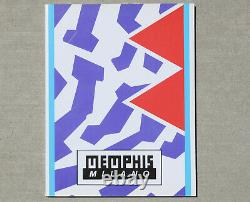 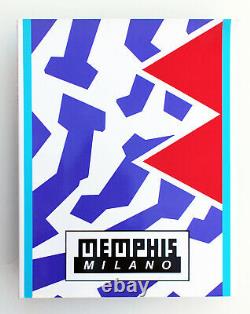 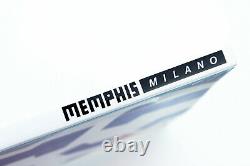 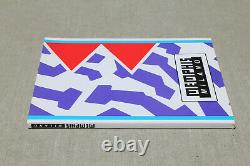 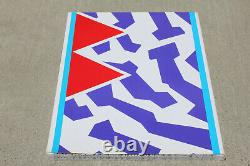 Scarce Out of Print'Memphis Design. Italian 1980s Modern Design Furniture and Lighting Book. The most comprehensive book about Memphis Design. Memphis is a design movement that began in 1981. While the name might make you think that it was born in Tennesse, it got its start in Milan, Italy.

Designer Ettore Sottsass founded the Memphis Group with other designers and architects. They took their name from a Bob Dylan song titled Stuck Inside of Mobile with the Memphis Blues Again which was played on repeat during their first meeting. Like many creative movements, Memphis was a reaction against the status quo.

The 1950s/60s mid-century modern and 1970s minimalism were about structure and straight lines. To counter that, Sottsass centered the groups thinking around radical, funny, and outrageousessentially, disregarding what was considered in good taste at that time.

The geometric figures of Art Deco, the color palette of Pop Art, and 1950s kitsch inspired their unusual aesthetic. The Memphis Group made their debut at the 1981 Salone del Mobile of Milan, a renowned furniture fair.

Their style, while attention-grabbing, was commercially rejected and instead attracted a cult following. Designer Karl Lagerfeld was a fan and bought the entirety of Sottsass first collection, and when David Bowies estate auctioned his art collection in 2016, it was revealed that he had collected more than 400 pieces since the 80s.

Despite its fringe status, there were moments when Memphis entered the mainstream to inform pop culture in an unforgettable way. Its aesthetic can be seen on the set of Saved by the Bell and Pee-wees Playhouse. The furniture realm is largely where they stayed (although they also created other design objects) until 1988 when the collective officially disbanded; Sottsass left in 1985.

Memphis design began to reemerge in 2005 and 2006. The LACMA in Los Angeles exhibited a survey of Sottsass designs a year before he passed away.

Many years later in 2014, Nathalie Du Pasquiera founding member of the groupdesigned a collection of patterns for American Apparel. In 2016, the brand Supreme released a series of skate decks and clothing designed by Alessandro Mendini, who appeared in the first Memphis show.

Profusely illustrated with color pictures. Condition: new vintage dead stock, cover has minor shelf wear, small scuff on the front cover of the book, one bend corner and a tiny tear bottom right on the back cover of the book. The item "Rare Memphis MILANO Design Book Mid Century Modern 80s Ettore Sottsass Book" is in sale since Tuesday, October 27, 2020. This item is in the category "Antiques\Periods & Styles\Mid-Century Modernism".