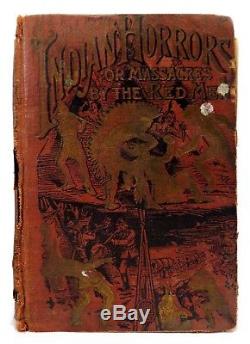 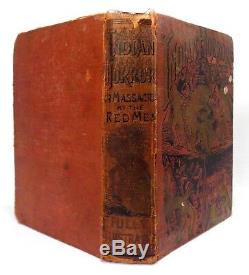 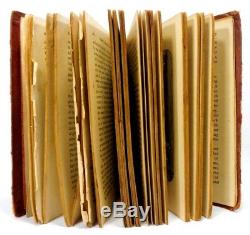 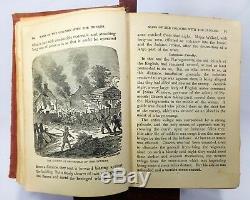 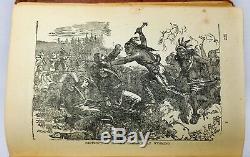 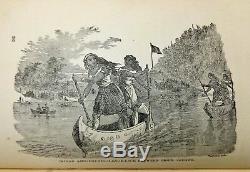 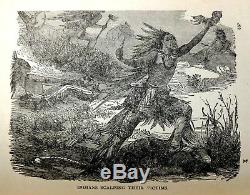 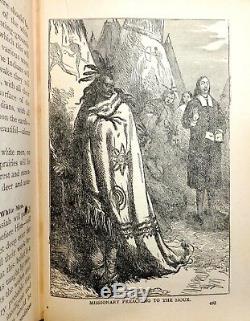 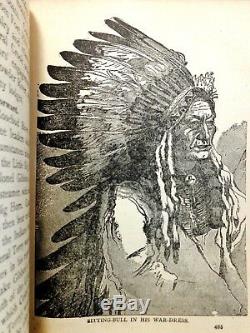 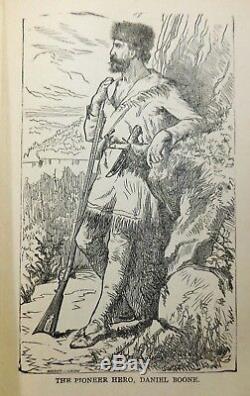 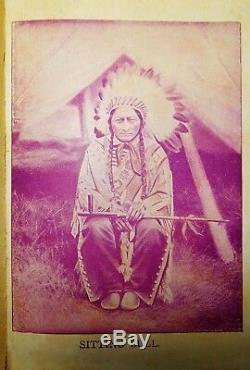 19th c Native American history (Eurocentric narrative). 7 ½" Height x 5 ½" Width (600 pages). There are a few loose pages toward the very front but the entire book is still intact and has no missing pages. The book would be rated to be in fair to good overall vintage condition, with the cloth binding largely intact and relatively no damage to the front or back cover of the clothbound book. The pages are largely free from tears, scribbling, perforations, corner folds, creasing and other issues, such as stains, mildew, discoloration or significant tanning. Only the loose pages toward the front of the book prohibit me from grading it much higher than I can do due to the issue of the loose pages. The red cloth of the cover is stamped with black ink font and graphic iconography, punctuated with adjacent gold gilt ink stamping, pressed and embossed into the cloth front cover. There's also a slight break of the glue which held the spine's upper flap down inside the binding, causing this flap to have become loose and free. A great book of significant American historical value. This was the pervasive Eurocentric, majority, white point of view expressed toward Native Americans at the end of the 19th century and a less-than-favorable one at the very least.

What's crucial and academically critical however, is the addition to the historical record it leaves and the lasting impression of misunderstanding, imperial righteousness, racial superiority and the territorial expansionist doctrine of'Manifest Destiny,' spurred on by messianic, Christian evangelical zealotry and the majority belief that the displacement of an entire people and race from their native lands by European immigrants was somehow and in some way, sanctioned and even originally designed by God. What today would be considered to be outrageous and blatantly racist, was only slightly more than 100 years ago, the accepted, majority held opinion toward Native Americans, which made their wholesale displacement, slaughter, eventual internment and official theft of their land, more palatable and widely accepted. An important work that speaks to the dangers of intolerance and misunderstanding in the past and a warning against the same phenomenon today.

A rare volume and a must-have addition for any serious collection of Native American history. Fair to Good overall vintage condition. A few loose pages toward the front of the book. The item "RARE LATE 19TH C VINT'INDIAN HORRORS OR MASSACRES BY THE RED MEN' (1891) CLOTH" is in sale since Saturday, November 10, 2018. This item is in the category "Books\Antiquarian & Collectible". The seller is "modsanctuary" and is located in Milford, New Hampshire. This item can be shipped worldwide.