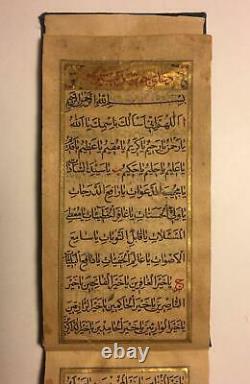 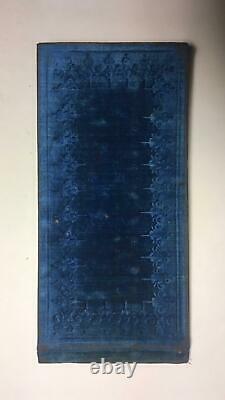 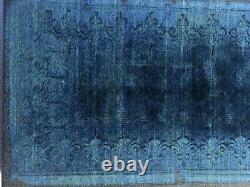 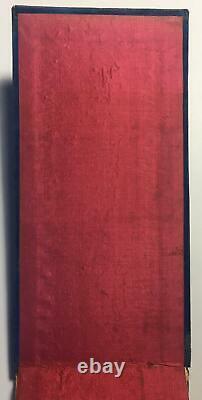 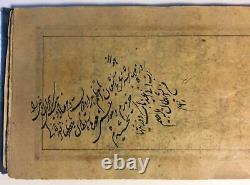 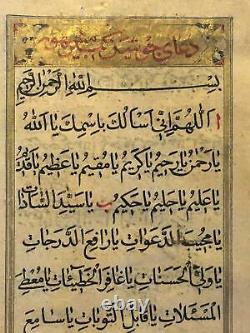 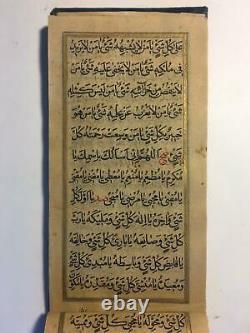 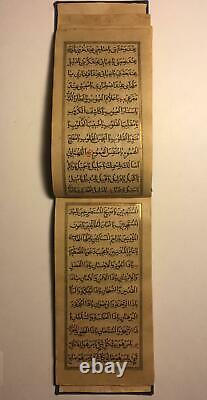 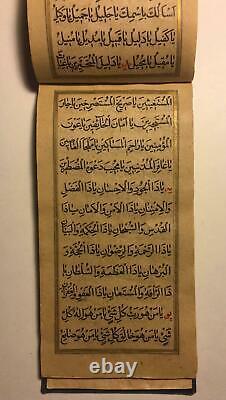 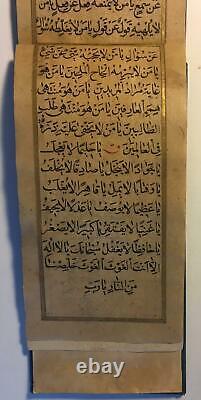 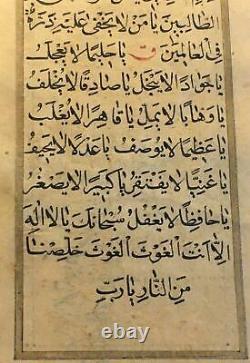 Rare and Super Fine Quality Antique Islamic BAYAZ Prayer Manuscript Book. This is a Gold Illuminated Prayer Book from the Early 19th Century Qajar Dynasty, with Beautiful One of a Kind Handmade Emboss Velvet Binding in Dark Persian Royal Blue and with Dark Red Silk Inner Binding. These types of Islamic Manuscripts are known as BAYAZ which are Vertical Manuscript Books usually containing Important Prayers which were used for protection. They were made in this style and size to be easily portable for the owner, because they use to carry them always in their pocket. At the first page of the book before the opening page, there is a note with a date. The note is Hand Written by The most important Prince in Qajar Dynasty Farhad Mirza Motamed Al Dawla for His Beloved Elder Daughter Mehr Mah Esmat Al Saltaneh.

He was a crown prince, governor, author, and bibliophile. He was the son of Abbs Mrz, younger brother of Moammad Shah, uncle of Ner-al-Dn Shah, and a learned and influential Qajar prince known for his firm governorship over several provinces of Persia.

The note is In the day of Wednesday, Month of Shaban, 1271 Hijri I bought this Manuscript Book and gave it to MihriMah Sultan May God Protect Her as a Gift. Farhad Mirza was a very knowledgeable and religious man and he had an impressive collection of Manuscripts which are in Museums all around the world and in the collection of important collectors. The Book is entirely handwritten on a high-quality handmade paper particular of 18th to 19th Century Qajar Dynasty. The Handwriting is top quality calligraphy which shows that this manuscript is definitely handwritten by a Master. The calligraphy is in Arabic Naskh Script, masterfully done with a strong hand.

The title of the book is there on the opening page of the book with a Red Ink in the Gold Illuminated Heading. The name of the book is "Jawshan Kabir" which is a very Important Prayer if not the most important in most Islamic Traditions. This prayer is known for its Talismanic and Magical Power for protection, in fact, its name suggests that. According to Muslims, God taught the prayer to him as a protection from injuries in war, instead of hard armor.

Prophet Mohammed used hard and heavy armor for protecting his body in the war. Because of the tightness of his armor, his body was injured.

According to Islamic Traditions, during the war, the angel Jibra'il (Gabriel) came and brought him a message from God, teaching prayer to Prophet Muhammad to protect him from bad events. Jibra'il said: O Muhammad! Your God conveys his salutations to you and has said to take this coat of armor and to recite it as this is a protection for you and your Ummah.

The prayer became his armor to protect him against injuries. The name of the prayer was taken from Muhammads heavy armor (Jawshan) in the battle. Is a supplication cited from the Prophet. The supplication includes 100 sections containing 1001 names and attributes of God. The supplication was revealed to the Prophet by Jabra'il (Gabriel). This supplication is so important that is usually recited as an essential part of Laylat al-Qadr rituals or at the first day of Ramadan. Some people write the supplication on their shrouds (Kafan), as recommended by some hadiths. The Jawshan Kabir Prayer has 100 parts and these parts are marked in Red Abjad Letters in this book. As you can see the first Red Symbol in the opening of the page is Alif which its abjad numeric value is one and the last Red Symbol in the last page is Ghaf which its Abjad Numeric number is 100.

So as you can see the RED Symbols in the manuscript are representing the number of the section, starting from 1 to 100 in Abjad System. Everything about this manuscript is super fine quality and great. You cannot believe the feeling of this manuscript once you keep it in your hand. The note shows that this manuscript was bought and gifted to a Qajar Royal Princess MihriMah Sultan by her Father Farhad Mirza Motamed Al Dawla in 1855 AD. Size: 5.5 x 2.75 Inches 14 x 7 CM.

Please zoom in on the images to see the quality and beauty of the calligraphy. It's a really fine quality work by a top master calligrapher. English translation of the part is. I entreat You by Your Names. O the All-Kind and Caring, Who manifests Himself with His Mercy and is inclined (even) toward those who turn away from Him. O the All-Bounteous and Favoring. O the Supreme Ruler and All-Requiting (of good and evil). O the All-Forgiving and Demonstrating.

O the All-Proving and Demonstrating. O the Absolute, Eternal Authority. O the All-Glorified, Who is absolutely free from all deficiencies and imperfections and from doing anything wrong or in vain. O He Whose help is always sought. O the Owner of all bounty and goodness and eternal exposition, (Who nourishes his creature with His infinite blessings, and who communication His decrees to all His creatures in the most perfectly eloquent way,).

O He Whose protection is sufficient against all fear and danger. All-Glorified are You; there is no deity but You! Save us from the Fire! This manuscript prayer has a very strong power over Evil Eye and all Problems and it's Protective Powers is undoubted. You can Google its benefits and also its complete beautiful English translation to know why and how. The item "RARE Antique Islamic Qajar Handwritten Prayer Manuscript Book Talisman / Protect" is in sale since Saturday, June 20, 2020. This item is in the category "Antiques\Manuscripts". The seller is "ethics-antiques" and is located in Rocklin, California.