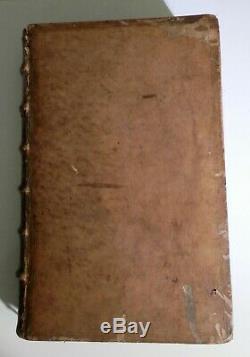 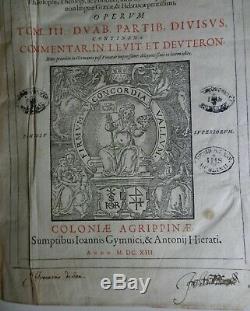 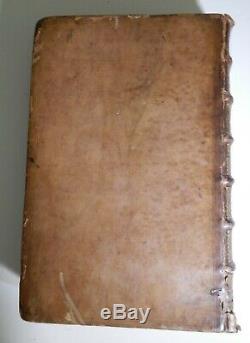 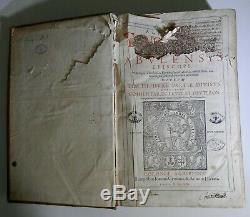 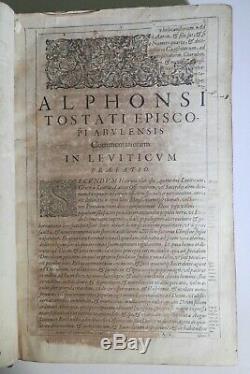 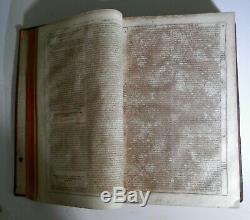 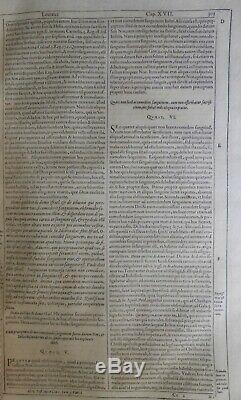 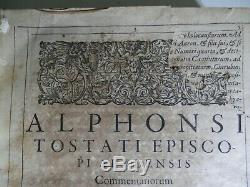 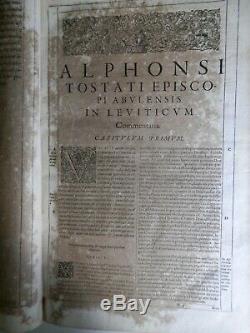 Alonso Tostado was known by many variations. He was a Spanish theologian, a counsellor of John II of Castile and briefly a bishop of Avila. A leading scholar of his time, he is particularly known as an early theorist on witchcraft, in his works he defends the possibility of flying witches based on biblical exegesis. He was also a significant influence on the Jewish Bible commentator and statesman Isaac Abravanel. This edition was published in Germany Coloniae Agrippinae.

Philosophi, Theologi, ac Pontificij Iuris Caesareiq: consultissimi, nec non linguae Graecae etc Hebraicae peritissimi. Nunc primum in Germania post Venetas impressiones diligentissime in lucem edita. Sumptibus Ionnis Gymnici, etc Antonij Hierati. 936 printed pages in two books or sections within. The cover is fully contemporary with boards covered in calf skin: The book benefits from original wood engravings within and the title page is printed in black and red inks: The tone is folio sized and all the pages are edged in red gloss ink: The language is of Latin text and we can see that the title refers to Leviticus and Deuteronomy: The book is related to the Occult and is a theological scholarly gloss with interpretations concerning the occult and the biblical books.

Glosses such as these were often written by cloistered monks or scribes as very few people would have been educated enough to attempt such work. The book would have been kept in a noble house, university or monastery, the esoteric and learned wisdom within would have meant that its audience was privileged and limited.

It is also possible that this one folio is just one volume of a greater commissioned set: Indeed, there is a III seen worn to the outer spine, which suggests to me, that this folio may be volume III of a larger set now missing or destroyed. Alphonso was also known as Alphonso de Madrigal.

He was a fifteenth century Bishop of Avila in Spain, and his biblical commentaries were first published in 1596 as part of his complete works. Colonia Claudia Ara Agrippinensium was the Roman colony in the Rhineland from which the German city of Cologne developed. Agrippina the younger was born in AD 15 in Cologne, wife of Emperor Claudius, she convinced her husband to elevate her birthplace to city status, Colonia Claudia Ara Agrippinensium. The name of the city changed through time, by the 4th century AD it was known as Colonia Agrippina, shortened to Colonia sometime after the 5th century.

This book was possibly printed in Cologne as there is a prominent reference to Colonia Agrippina on the title page. (39 cm) x 8 ¾ IN (25 cm) x 3 1/4(8 cm) thick: total weight at 3.38 Kilograms. Fine: two signatures seen in ink to the inside front cover. The book is in above average condition for its great age: The spin and binding are sound, and all pages are present: There is some damage to the inside cover page (please see pictures) however, this appears to be rodent / insect related: There are some signs of insect damage to the top and bottom spine however, this is localised and limited. There is foxing seen to some of the pages, which is age associated: some of the pages have small surface burns from fire or candle proximity and these are small and insignificant: Woodcuts remain crisp and are fine for a book over four centuries of age.

Further pictures are available upon request however, these will only be provided to serious potential buyers. Acquired from a private Southern Irish collector looking to divest their current extensive and rare collection. The item "Rare Antique Esoteric Early 17th Century Original 1613 Folio Occult / Witchcraft" is in sale since Friday, February 7, 2020.

This item is in the category "Books, Comics & Magazines\Antiquarian & Collectable". The seller is "ancientpasts" and is located in Peterborough. This item can be shipped worldwide.