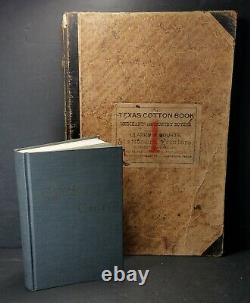 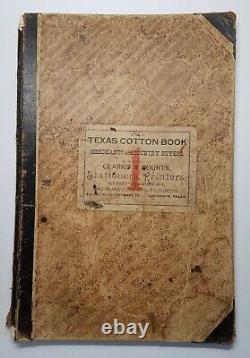 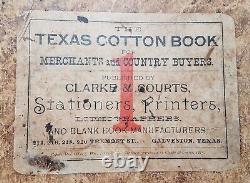 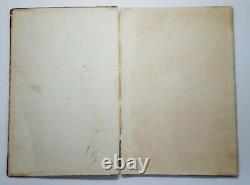 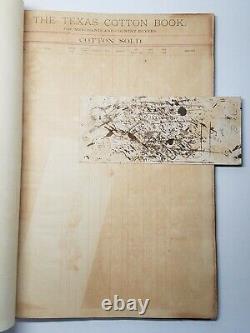 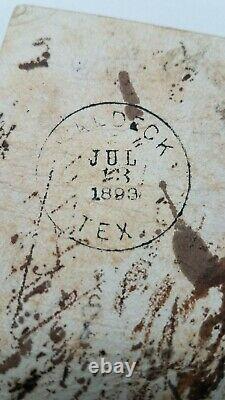 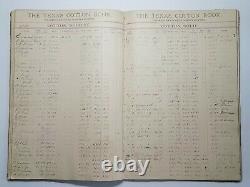 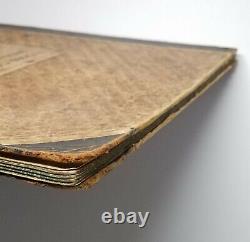 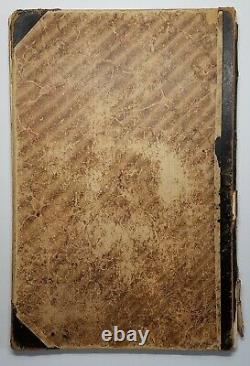 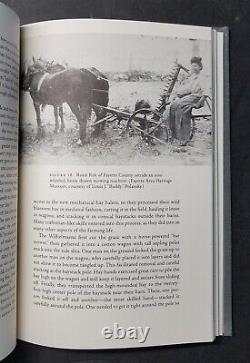 RARE Antique 1892 TEXAS COTTON BOOK Ledger? Waldeck Texas Fayette County 11x17. Fantastic Texas and Fayette County History from the time when Cotton was King. And Postmarked JUL 13 1893 and a copy of the book From Can See to Can't - detailing cotton farming in the 1920's in the same area represented in the ledger (more detail further below). A beautiful front cover label with a large superimposed red "1". 214, 216, 218, 220 Tremont St. In Exceptional Antiquarian Condition - 1/2 Leather Bound with Marbleized Boards and Page Edges - Binding Holding Well - Museum Worthy. Only one other example found for sale - in poor condition and listed at twice the price. Dimensions (Ledger): 11.5"W x 17 1/8"H x 3/8D. Dimensions (Trade Card): 9"W x 4"H. History in a Pecan Shell. Count Ludwig Joseph von Boos-Waldeck is the community's namesake. The count was head of a German Immigration Society when that organization bought the site in 1843.

First known as Long Prairie, Texas, a post office was opened under that name in 1860. The Long Prairie German Company (Infantry) was mustered in at the start of the Civil War. This was ironic since most German immigration was undertaken to avoid conscription in Europe.

Long Prairie's post office closed in 1876 but reopened under the name Waldeck in 1881. It stayed open until its permanent closure in 1925. In 1900 Waldeck was peaking. Besides the post office, the community was a voting precinct and had a saloon, store, blacksmith and cotton gin. Corn and cotton were principle crops although the soil was considered poor and the area was prone to flooding. By 1950 Waldeck had just two businesses to serve a population of 60. From Can See to Can't? Southern Prairies Texas Cotton Farmers 1997 1st Ed SIGNED. University of Texas Press, Austin, Texas, 1997. Inscribed, SIGNED and dated (2005) by Dan K. Utley on the title page. Cotton farming was the only way of life that many Texans knew from the days of Austin's Colony up until World War II.

For those who worked the land, it was a dawn-till-dark, "can see to can't, " process that required not only a wide range of specialized skills but also a willingness to gamble on forces often beyond a farmer's control - weather, insects, plant diseases, and the cotton market. This unique book offers an insider's view of Texas cotton farming in the late 1920s. Drawing on the memories of farmers and their descendants, many of whom are quoted here, the authors trace a year in the life of south central Texas cotton farms. From breaking ground to planting, cultivating, and harvesting, they describe the typical tasks of farm families - as well as their houses, food, and clothing; the farm animals they depended on; their communities; and the holidays, activities, and observances that offered the farmers respite from hard work. Although cotton farming still goes on in Texas, the lifeways described here have nearly vanished as the state has become highly urbanized.

Thus, this book preserves a fascinating record of an important part of Texas' rural heritage. SCARCE as a signed volume. Dimensions: 6.25"W x 9.25"H x 1D. This item is in the category "Books & Magazines\Antiquarian & Collectible". The seller is "imgonnamissyou" and is located in this country: US.