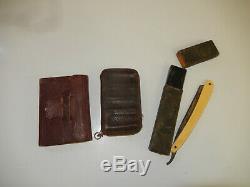 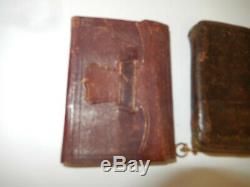 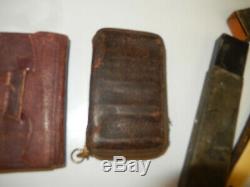 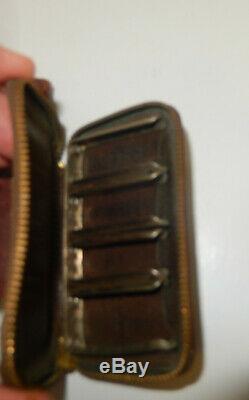 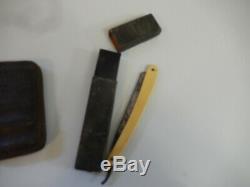 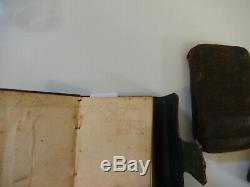 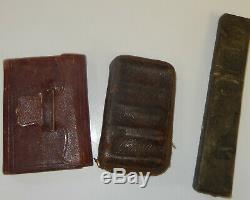 The author is RC Turpin, his father, Phillip Turpin, is considered one of the founding and more prominent families in early Ohio history. Phillip made his wealth mostly off of the early land speculation in Ohio, and the family was very well connected. The diary is approx 3/4 or more of the way filled. It is loaded with historic information pertaining to the steamship, railroad, and canal travels of the time period, including names of the ships and railroads.

It talks about many things, much you need a really good magnifier to read. Astor at one point, but I couldn't make out why. This diary tells a historic story of travel at an early time in U. History, and from a prominent family that settled early in the Northwest Territory. RC would marry the next year, but pass away in 1847 from consumption why traveling again on steamship in the south.

Included is a coin holder and Solenger straight razor that were also told to be his, but haven't any provenance other than the diary. This item has been in a safe for close to ten years. The coin holder, is fragile and has a tear near the zipper, so can only be opened and closed with carefulness, we have left it open, the blade is solid but rusted, it has a name on it but I couldn't read it. THIS ITEM IS MUSEUM QUALITY AND TRULY A PIECE OF AMERICAN HISTORY. Among the children of Dr.

TURPIN was Philip TURPIN, his only son, he having two daughters besides. To him, at about the time he attained his majority, the father presented, by assignment, the right to one thousand acres in the Virginia military district, under the CRITTENDEN warrant. Young Philip made several trips on horseback, near the close of the century, to and from the Miami valley, sometimes visiting Lieutenant CRITTENDEN at Lexington this was the father of John J.

CRITTENDEN, the celebrated lawyer and statesman; and finally, it is believed in the year 1797, he set his pioneer stakes down upon the rich tract below Newtown subsequently patented to him, and began improvement on it. After a few years he removed to the Kentucky shore for a more healthful location, and resided on the hills opposite the mouth of the Little Miami. In 1799, October 9, his patent to the Survey No. 416, upon which he had located, for one thousand acres, was granted and signed by John ADAMS, President of the United States and Timothy PICKERING, Secretary of State. TURPIN was married in 1807, to Miss Mary SMITH, of a family that had just immigrated to Kentucky from New York. His father was a slave-holder at the old home, and shortly after his marriage sent out to him a young colored girl named Gracie, as a house-servant. WATKINS, is still living in the family of E.

TURPIN, and is supposed to be eighty-eight to ninety years old. She was at the time of her arrival the only colored person in the neighborhood, and was naturally a great curiosity. TURPIN spent five to six years upon the Kentucky hills, where his first children, Philip and Ebenezer, were born, and he then removed to his Anderson farm. In 1824 he erected the well known Turpin mill, a large flouring establishment, upon the site of the old mill of the HOLLEYS at that point, about a quarter of a mile below the present Union bridge, probably at the same place where the floating mill of WICKERHAM was anchored in the pioneer days.

He conducted this mill, as well as farming operations. In the mill he was in partnership for the first five years with his brother-in-law, Aaron FOULK, who was a practical millwright and miller, and had superintended the construction and starting of the mill. TURPIN also, about 1826 or 1827, built a small distillery on Clough creek, one mile from the mill, which he carried on for three or four years, and then left it to the management of his sons.

He remained in the milling business, however, until the time of his death, in 1834. He built the original family mansion at Union bridge, of which the present mansion, occupied by the younger Philip TURPIN, is an enlargement. The mother died in August, 1851. They left children as follows. Philip Parmell, born November 18, 1804; died June 24, 1818.

The item "RARE ANTIQUE 1845 RC TURPIN OHIO 1ST FAMILY'S DIARY OF STEAMSHIP RAILROAD TRIP" is in sale since Tuesday, November 5, 2019. This item is in the category "Books\Antiquarian & Collectible". The seller is "moandchiv" and is located in Wilmington, Ohio.