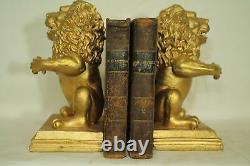 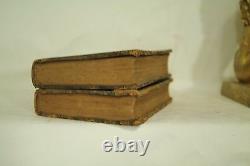 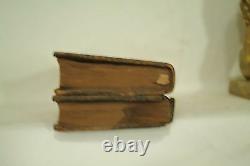 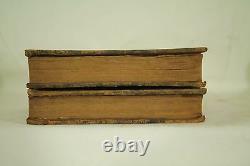 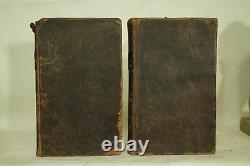 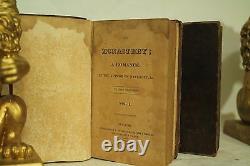 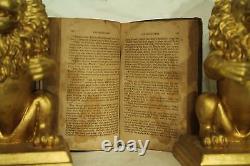 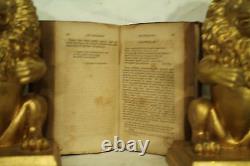 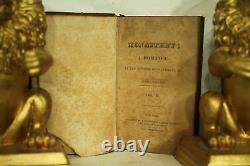 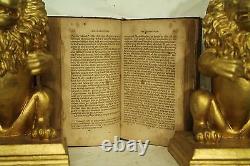 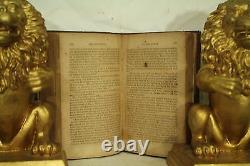 Rare antique old leather two volume set. THE MONASTERY; a romance, by the author of Waverly. Published by E Duyckinck, Collins & Hannay, and William B Gilley.

And is set in the time of. The action is centred on the. In south east Scotland, on the. At this time, circa 1550, the. Is just beginning, and the monastery is in peril. A love story is interwoven as the Glendinning boys fall in love with Mary Avenel. Edward ends up becoming a monk, and Halbert finally marries Mary, after service with the Earl of Murray.

In the many conflicts between England and Scotland the property of the Church had hitherto always been respected; but her temporal possessions, as well as her spiritual influence, were now in serious danger from the spread of the doctrines of the Reformation, and the occupants of the monasteries were dependent on the military services of their tenants and vassals for protection against the forays of Protestant barons and other heretical marauders. Dame Elspeth's husband Simon had fallen in the battle of Pinkie. (1547), and the hospitality of her lonely tower had been sought by the widow of the Baron of Avenel and her daughter Mary, whose mansion had been seized and plundered by invaders, and subsequently taken possession of by her brother-in-law Julian. While confessing the baroness on her death-bed, Father Philip discovered that she possessed a Bible, and as he was carrying it to the Lord Abbot, it was, he declared, taken from him by a spectral White Lady, a character resembling the Undine. Which Scott borrowed from Friedrich de la Motte Fouqué.

Having exchanged it for a missal, he was unhorsed on his return by the apparition; and, on reaching the monastery, the book had disappeared from his bosom, and he found the freebooter detained in custody on suspicion of having killed him. The White Lady was next seen by Elspeth's son Halbert, who was conducted by her to a fairy grotto, where he was allowed to snatch the Bible from a flaming altar. The rest of the family were astounded by the arrival of Christie, who confirmed Sir Piercie's assertion, and announced that he had brought Henry Warden to be dealt with as a heretic by the lord abbot.

But the preacher and Father Eustace had been intimate friends at college, and the sub-prior was urging him to save his life by returning to the bosom of the Church, when Edward interrupted them to confess his jealousy of his brother, and his resolution to become a monk, in obedience to the White Lady who had appeared to him. Father Eustace then decided to leave his prisoner at the tower, under promise to surrender when summoned to the monastery; and, having learnt from the freebooter that Julian Avenel would fight for the Church, despatched him in search of Sir Piercie and the miller's daughter. That same night the lord abbot, alarmed by intelligence that English and Scottish soldiers were advancing with hostile intentions against the monastery, resigned his office to the sub-prior. Having taken the road to Edinburgh, Halbert had joined a squadron commanded by the Earl of Murray, who sent him forward to prevent an engagement between the English, under Sir John Forster, and the supporters of the Church, under the Baron of Avenel.

He arrived too late, but the earl induced Sir John, who had won the battle, to withdraw, and marched his troops to St Mary's. Here the new abbot had assembled his brotherhood in the village, in anticipation of the destruction of their home. The regent and his followers formed up facing them, and the first matter settled was the marriage of Halbert with the heiress of Avenel. The monks, at the intercession of Henry Warden, were allowed to retain their monastery and lands on condition of being laid under contribution; while Edward, who had sought another interview with the White Spirit, was told that the knot of fate was tied, and impressed with the belief that the marriage of his brother with Mary Avenel might prove fatal to both of themDuring his absence from the tower, Happer the miller and his daughter Mysie arrived on a visit, and soon afterwards came Sir Piercie Shafton, as a refugee from the English Court.

The next day the abbot came to dine with them, and offered Halbert, who had quarrelled with the knight for his attentions to Mary, the office of ranger of the Church forests. He, however, refused it, and startled his rival with a token he had obtained from the mysterious spectre. The following morning they fought in a glen, and Halbert fled to the Baron of Avenel, leaving Sir Piercie apparently mortally wounded. His companion thither was Henry Warden, who offended the laird, and assisted Halbert in his determination to escape from the castle, rather than serve under his host's standard.

The knight, however, had miraculously recovered, and on making his way back to the tower, was accused by Edward of having murdered his missing brother, in spite of his assurance that the youth was alive and uninjured. With the sub-prior's approval he was treated as a prisoner; but during the night Mysie assisted him to escape, and accompanied him northwards, dressed as his page. Mary Avenel, meanwhile, in the midst of her grief at the supposed death of her lover, was visited by the White Lady, who comforted her by disclosing the place where he had hidden the Bible, which she had secretly read with her mother. Add a map to your own listings. This item is in the category "Books & Magazines\Antiquarian & Collectible".

The seller is "scottalbertson" and is located in this country: US. This item can be shipped worldwide.