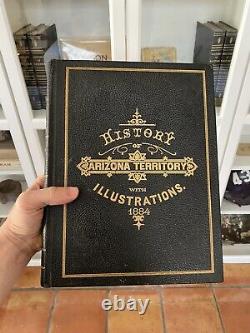 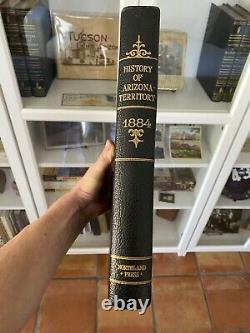 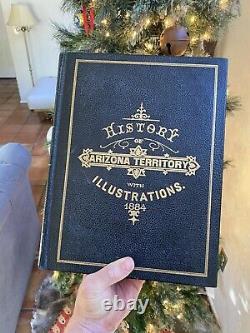 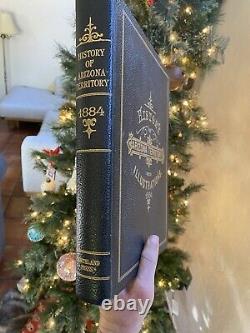 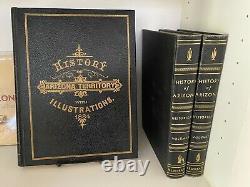 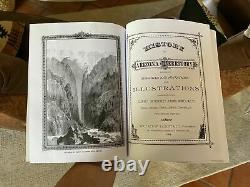 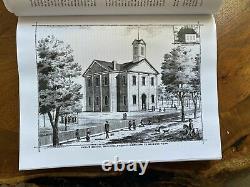 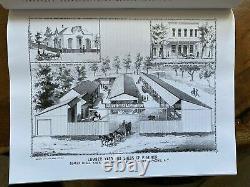 Book is beautiful bound and will be a great addition to any collection. This work documents the history, the individuals (natives, pioneers, settlers), scenes and events of life in the mining towns, farms and ranches, forts and military outposts, and the growing communities of the frontier territory that was Arizona.

The introduction indicates that the text has been divided into twenty-eight sections for easy reference, including a history of the Arizona Territory (including an history of the first Missions and missionaries); Native Indian tribes; Arizona Territory's physical features, climate, soils, and natural resources; the "state of society in the Territory;" the newspapers of the Territory; biographical sketches of prominent citizens; the public schools of Arizona; "miscellaneous historical matters, " a description of the various counties: Cochise, Apache, Yuma, Pima, Maricopa, Mohave, and Gila among others. In the section entitled "Native Indian tribes described, " all the tribes are listed, with a brief description of each. The Yumas a quiet, inoffensive set of beings now, though in times past war-like and ferocious. The men are tall, and finely formed, and the women, when not disfigured by tattooing, are not remarkably repulsive.

The Papagos (the Baptized) as they were converted to Christianity by the Spanish missionaries, and are still connected with that church. The Papagos are further advanced in civilization than other tribes. They live by cultivating the soil and raising stock. They are peacable, well-disposed, and have never asked for or received much assistance from the Government.

The Apaches: As far as intellectual ability they equal any race of men on earth. Of course their mental powers have not been educated or called forth as far as books are concerned or the experience of other nations or individuals than themselves.

But as far as mountain, plain, desert, oasis, rivers, lakes, trees, plants, and animals of their own country, they are unexcelled. The Navajos are a branch of the Apaches and are intelligent, active, and industrious...

After being conquered, they were removed to a reservation on the Pecos River, but the climate proved unhealthy, and after many had died, they were allowed to return to their old home. They are said to own as many as 1,500 horses, 500,000 sheep, and 5,000 head of cattle. The Moquis "are said to be the purest type of the Aztec living, and the only tribe who can decipher the inscriptions on the ancient pottery and the hieroglyphics on the cliffs;".

Also includes a description of the Hualapais, the Pimas and the Maricopas. This work is illustrated with numerous in-text engravings and no less than 63 lithographic plates. The lithographic illustrations depict Arizona Territory's most prominent citizens and their homes, including many specific ranches, farms and properties; many of the buildings in Phoenix, Tucson as well as street-scenes and views of other towns (Flagstaff, Prescott, Wilcox, Globe, Florence, Fort Grant, Mesa, Lehi, Tombstone, Silver King, Jerome), mines, mills, and other industries of the territory. Published in 1884, "History of Arizona Territory" remains to this day a tremendous visual resource for the American West.

The item "History of the Arizona Territory 1884 Northland Press Antique Rare (5/350)" is in sale since Tuesday, December 22, 2020. This item is in the category "Books\Antiquarian & Collectible". The seller is "arizonaorigins" and is located in Tucson, Arizona. This item can be shipped to United States.