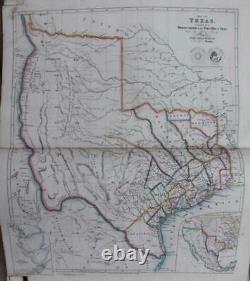 ARROWSMITH'S LONDON ATLAS 66 MAPS INCLUDING THE RARE TEXAS MAP 1843. The London Atlas of Universal Geography, Exhibiting the Physical & Political Divisions of the Various Countries of the World. John Arrowsmith, 1842 [- 1846]. Some splitting along the folds on a number of the maps [But not Texas], title tabs soiled and boards detached with the binding mostly perished. Although the engraved title is dated 1842, the maps are dated between 1842 and 1846.

Only 50 of the maps are listed on the contents page, numbers 51 to 66 presumably added to the publication at a later stage. The Texas map, dated 8th June 1843, the second state is probably the first to show the full extent of Texas's claim to the region of the upper Rio Grande, an area included within Texas's boundaries until the Compromise of 1850... [and] the best information on Texas geography available in Europe (Martin & Martin, Maps of Texas and the Southwest, 32). The full list of maps. THE WORLD ON MERCATORS PROJECTION. The Inland Navigation, Rail Roads, Geology & Minerals. BURMA, SIAM & COCHIN CHINA. SOUTH EASTERN PORTION OF AUSTRALIA. LA PLATA, URAGUAY & CHILE. ACQUISITIONS OF RUSSIA SINCE ACCESSION OF PETER 1ST. EASTERN FRONTIER OF CAPE OF GOOD HOPE. WEST COAST OF AFRICA, GUINEA ETC.

WEST COAST OF AFRICA EXPEDITION OF CAPTAIN TROTTER. AUSTRALIA [WEST] 1st May 1846. FURTHER IMAGES AVAILABLE ON APPLICATION. All items are complete with no pages or illustrations missing, in the original binding and with no tears, rips or other major faults unless described above. FOR LARGER AMOUNTS I ALSO ACCEPT CHEQUES AND BANK TRANSFER.

Get Supersized Images & Free Image Hosting. Create your brand with Auctiva's. Attention Sellers - Get Templates Image Hosting, Scheduling at Auctiva. The item "ARROWSMITH'S LONDON ATLAS 66 MAPS INCLUDING THE RARE TEXAS MAP 1843" is in sale since Friday, October 2, 2020. This item is in the category "Antiques\Maps, Atlases & Globes\North America Maps". The seller is "billybottle1" and is located in Minster on Sea. This item can be shipped worldwide.