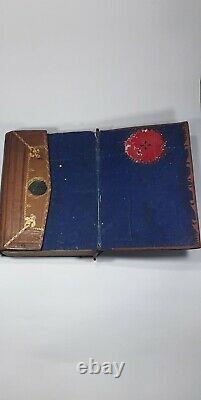 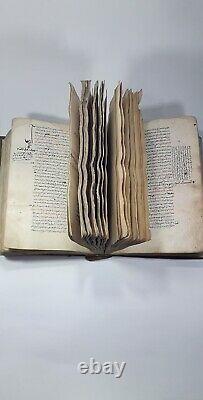 Arabic Islamic manuscript Rare Handwritten book of first Sheikh of Al-Azhar. This handwritten manuscript is a very old book dated 16Th. It is about Islamic Law (Sharia) according to Imam Maliki. It is titled "Explanation Kharashi Ala moton Abi Diaa" by Sheikh Mohammed bin Abdullah Alkharashi. Anecdotes of manuscripts by Imam Kharashi. There is one copy in the Al Saud University Library in Saudi Arabia. Ancient Manuscript of a Grand Sheikh Mohammed bin Abdullah Alkhrashi Al-Khurshi has become famous. The Sheikh was widely aware of the diversity of culture, especially the interpretation of the Quran and the jurisprudence of the doctrine of Imam Malik bin Anas. He, therefore, left a rich Arabic and Islamic library. This part of the manuscript contains +550 pages composed of 35 lines in natural black and red ink; oriental writing on very strong linen paper, explanations in very large margins Dimension: 25 X 19.

Garnet leather binding, made by its former owner. As you can see, the calligraphy is fantastic so the side and footnotes.

The post of Grand Imam of Al-Azhar was introduced during the 17th century, during Ottoman rule in Egypt. Al-Azhar historian Al-Jabartî locates the death of Sheikh Muhammad Al-Kharashî in 1690 and identifies him as the first Grand Imam of Al-Azhar. Indeed, it was from this time that the mosque-university of Al-Azhar acquired a hierarchical organization to manage its growing activities. The organization of Al-Azhar had until then been left to the sultans and princes, but the increase in the number of students motivated this development. Estimated between 5 To 15 days. We will make sure that the item is securely wrapped and boxed.

Do you have any questions? The item "Arabic Islamic manuscript Rare Handwritten book of first Sheikh of Al-Azhar 16th" is in sale since Monday, April 12, 2021. This item is in the category "Antiques\Manuscripts". The seller is "new_antique" and is located in Oran.