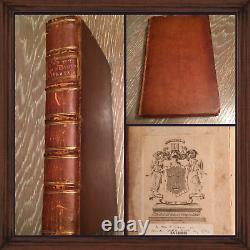 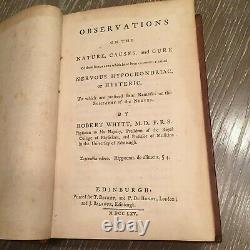 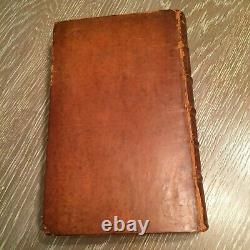 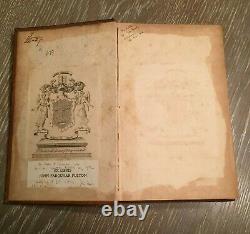 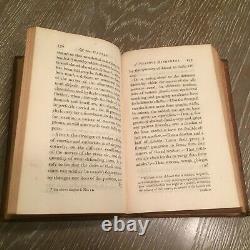 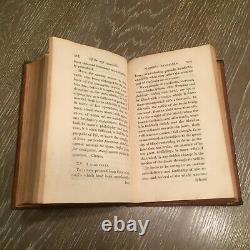 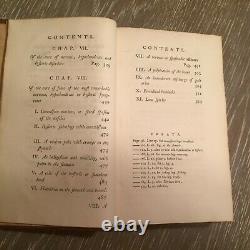 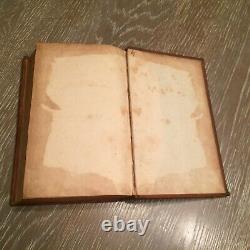 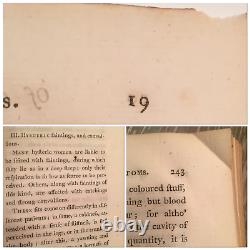 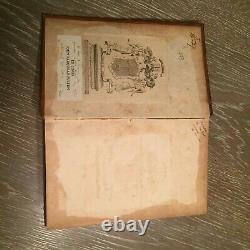 Rare Important Antique Medical Book Robert Whytt 1765 First Edition Scotland. Observations on the Nature, Causes, and Cure, of those Disorders which have been commonly called Nervous, Hypochondriac, or Hysteric, to which are prefixed some remarks on the sympathy of the nerves. Some wear to corners and light chipping to calf binding. There is some browning to front and rear inside covers and ffep.

Some light foxing and light toning throughout. The inside front hinge is weak but sill attached. Inside is remarkably clean and readable. I have included photos of any flaws.

There is a chip in the paper on page I19, a small dark mark in middle of one page and page 243 has been folded over. Inside front cover has armorial bookplate of Sir Archibald Grant of Monymoske Bar and Ex Libris Bookplate of John Farquhar Fulton. Fulton has written an indecipherable message and signature on the bookplate and his address on ffep. A nice copy with two very interesting associations. Please ffel free to message me with any questions or if you would like additional photos. Du Hondt, London; and J. Armorial bookplate of Sir Archibald Grant of Monymoske Bay and Ex Libris Bookplate of John Farquhar Fulton. The first important English work on neurology after Willis (McHenry). The Observations reveals great clinical acumen and provides vivid accounts of a wide range of neurological and psychiatric patients whom Whytt attended at the Royal Infirmary. He declared that disorders variously called flatulent, spasmodic, hypochondriac, hysteric, and more recently, nervous, had become the wastebasket diagnosis for those conditions about which physicians were ignorant; and therefore he set out to wipe off this reproach and to throw some light on these ailments.

He resorted to his previous work to explain the nature of these diseases, emphasizing the sentient and sympathetic power of the nerves, and described instances of referred pain anticipating, by his explanation of the causes, modern demonstrations of the reasons for them. Whytt clarified Thomas Williss term nervous, already in use for over 100 years, and explained such physical phenomena as blushing, lacrimation, and sweating, brought on by emotion or passion, as owing to some change made in the brain or nerves by the mind or sentient principle. This work added significant contributions to scientific medicine.

(25 September 169617 September 1778), 2nd Baronet in his early life was a company specualtor and the Member of parliament for Aberdeenshire, 17221732. Grant was an avid book collector. (November 1, 1899 May 29, 1960) was an American neurophysiologist. He received numerous degrees from Oxford University. He taught at Magdalen College.

School of Medicine at Oxford and later became the youngest Sterling Professor. His main contributions were in primate. Neurophysiology and history of science. Fulton published many books and articles and was an avid book collector who donated many of his books to Yale. The item "Antique Medical Book Robert Whytt 1765 First Edition Psychiatry Rare" is in sale since Tuesday, June 2, 2020.

This item is in the category "Books\Antiquarian & Collectible". The seller is "pazzomom" and is located in Pawcatuck, Connecticut. This item can be shipped to United States.