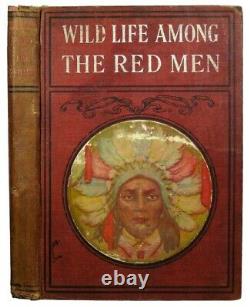 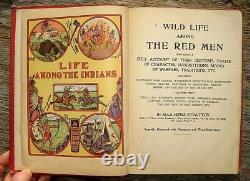 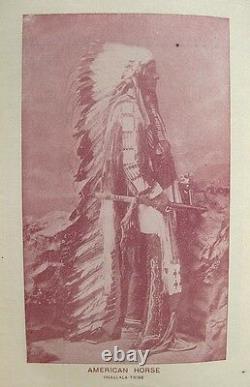 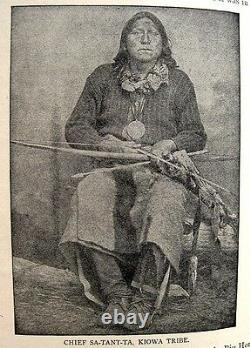 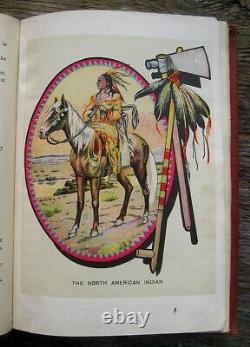 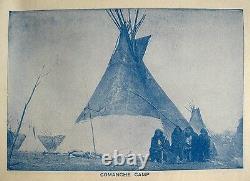 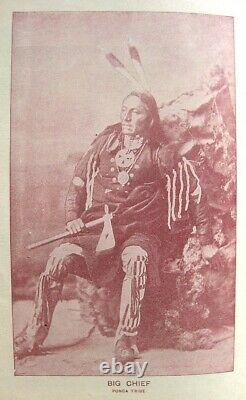 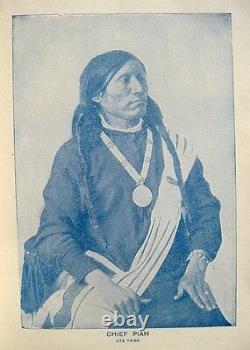 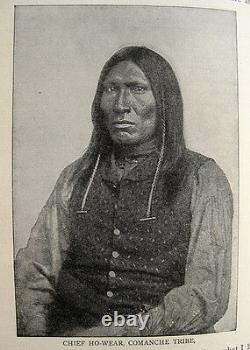 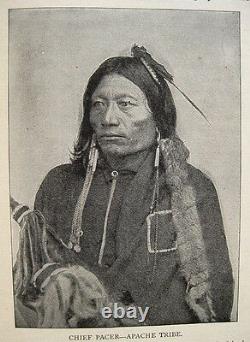 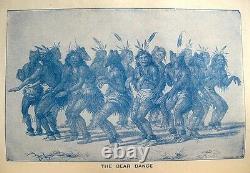 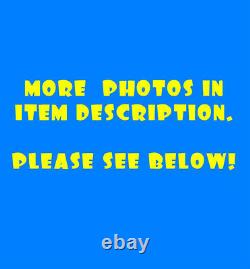 Note: Many of my clients are scholars and researchers seeking specific information related to their field of interest. For their convenience I include the following details directly from this book. Including Fantastic War Dances, Mysterious Medicine Men, Desperate Indian Braves, Tortures of Prisoners; Daring Deeds; Adventures of the Chase, Etc. Superbly Illustrated with Phototype and Wood Engravings. Published in 1902 (no publisher cited).

10 x 7 cloth hardcover with front pastedown illustration. Illustrated with color frontispiece, monochromatic half-tone photos (blue like cyanotype, red, black and white), along with text illustrations and one other color page. Exterior as shown in photo with some surface wear on front board, also some nicking and fraying of cloth on spine, edgewear, rubbing at corners. Binding is still pretty good, hinges unbroken, text block secure. One or two illustrated pages near the middle have roughened edges and a bit of soiling but remain intact.

Text is complete and generally clean aside from occasional finger smudges. Occasional small edge tears in the margins, nothing serious. Otherwise no torn, loose or missing pages. Gift inscription on first endpaper.

Good surviving example of this rare American Indian title from the turn of the century. This is a rare and beautiful book about Native American history, focused largely on famous Indian leaders and conflicts with Europeans/white settlers during the 17th, 18th and 19th centuries. It was probably written for a younger audience (the text is presented as an ongoing dialogue) yet it presents a great deal of information and contains more than a hundred antique photos and illustrations of American Indians and scenes related to their history. Certainly a wonderful 118-year-old title and collectible, a great introduction to some of Americas greatest true Indian stories.

In order to give you the most accurate description of this rare and fascinating book, I have provided some helpful details below, starting with a detailed summary of the contents, followed by an equally thorough summary of the books hundred-plus photos and illustrations. Further down this page, you can see some of these historic images for yourself. Due to the historical significance of this work and its valuable Native American portraiture, I took the liberty of including more than the usual complement of pictures. It may take an extra few seconds to load, but well worth it. I hope youll take a few moments to have a look.

(2) Myths and Legends: Scared by an Owl Mudgekewis Kabibonka Shawandasee Traditions of Wabun The Flood The Dove The Shepherd and His Llamas Ash and Elm, were they Adam and Eve? A Race of Giants Mexican Tradition of a Great Tower The Story of Three Eggs The Bearded White Man Man Descended from the Monkeys The Master of Life was an Indian The Sky-Holder The First Men were Cayotes Owayneo, the Creator Queer Mandan Tradition Old Newell Bear Book Written by an Indian Klose-Kur-Beh Legend of the Nakannies Tradition of Hiawatha. (3) The Coming of the Indian: What are the Spots on the Moon What is the Rainbow Forty Tribes Extinct Kamchatkans Tartars Eight Tribes, with Many Tribes Names Government Five Nations Tribes That Kept Flocks of Deer for Cows Very Superstitious Happy Hunting Ground Why Indians Scalp an Enemy Cruelty Sun Worship Medicine Men Bath House Picture Writing Painting Their Bodies Belief in Dreams Queer Names Squaw Men Legend of the White Hawk Sioux War Cry. (5) Festivals Feasts: Nu-mock-muck-a-nah The First Man The Great Canoe Dances of the Iroquois Strawberry Festival War Dance Ghost Dance Scalp Dance Masquerade Strong Heart Dance Thunder Feast Feast of the Dead Calumet Dance Buffalo Dance Pipe Dance Dog Feast Medicine Dance Fleeka, or Arrow Dance How the Comanches Smoke Horses The Lords Prayer in the Wampanoag and Mohegan Languages. (6) Early Discoverers: The Norsemen Trading with the Indians Keel Cape Was it Cape Cod?

First fight with the Indians Death of Thorwald Settlement abandoned First white chief Natives that Columbus found in the New Land His reception by them His return for their kindness Eclipse of the sun Indian slavery Columbus began the slave trade Vasquez Ponce de Leon De Soto How the Spaniards used the Indians How they found out that the newcomers were mortal Indians generous to a brave enemy Natchez Indians The white mans fire water Henry Hudson. (7) More About the Early Days: Price paid for New York What Red Jacket thought of the white men Maquacomens opinion Different from that of Sitting Bull What Menawa said Legend of the first Indian blanket Sir Humphrey Gilbert Sir Walter Raleigh How Amidas and Barlow were received by the natives Grenvilles expedition His injustice Fate of the colony Story of Wingina First white child of Virginia Tradition of the fate of the colony Concert Startling interruption A joke that was not a joke A visitor.

(8) First Settlers and Their Dangers: Colonists were not wise Story of Hatuey Natives of the West Indies Brief history of the Islands What the Caribs of Grenada did Chamberlain John Smith Settlement of Jamestown Powhatan Pocahontas Smith a prisoner Free again Cannon and grindstone Wars with Opechancanough His death Massacres of Virginia Story of MacDougal. (9) Stories of Thrilling Interest: Cruelty of the Spaniards Dogs and Susquehannahs Planting gunpowder John Eliots labors of love First justice of the peace His warrants Squanto, the Sokokis chief Will an Indian baby drown? Story of the Kennebec Indians The Rockaway Conference 0glethorpe Story of Tomochichi William Penn A white feather Sioux generosity The Indian and the missionary The prophet of the Allegheny Logan Another removal Story Pachgantschilia Joseph, the Nez Perce Early conceit Principal Indian events since 1862 Mission Indians of California A war dance.

(13) Strange Superstitions: Asking a bears pardon Queer superstitions William Penn Meeting at Shakamaxon The treaty of the Indians The chief Tammany Sainted after death The festival of Tammany King Williams War Great cruelties The Indians abcxs not always to blame Story of Major Waldron Capture of Dover, New Hampshire War of extermination Premium for scalps Deerfield Haverhill, Mass Hannah Dustin or Duston Her capture and escape Assacambuilt and his war club Jesuits The Bars Fight Only five years of peace. (15) Story of Braddocks Defeat: Oglethorpe and the Indians of Georgia Tomochichi and his queen visit England John Wesley Whitfield War between England and Spain Oglethorpe invades Florida Helped by his Indians France joins Spain War in the Ohio Valley Half King Battle of Great Meadows Braddocks defeat George Washington His narrow escapes Story of the doctor Adopted by the Indians Story of Murderers Creek The good Naoman Destruction of Kittanning Massacre of Fort Henry Cherokee War First Indian Treaty. (16) French and Indian War: More about the Cherokees A Medicine Woman Her escape Story of Letitia Crane French and Indian War Fort Edward Attack on Johnsons Camp Mohawk Chief Hendrick His death Pontiacs conspiracy His generalship Story of Alexander Henry The first discovery of gold in California A singular bear. Illustrations Include: Remarkable mounds at Marietta Ohio Curious dwellings of the Aztecs Penns Treaty with the Indians Battle of Tippecanoe Ouray, great chief of the Utes Wichita Indian Camp Arapahoe Braves, camp supply, Indian Territory Yamapi, runner for Chief Ouray Entrance of Cortez into Mexico Scene of Indian attack on the James River in the early history of Virginia Indian hunting one of the largest species of buffalo American Horse, Ogallala tribe The snow-shoe dance Capture and death of the Indian chief Sitting Bull Hairy Bear, Ponca tribe Battle of the Little Big Horn River Salute by Indians to a dead chief Indian war dance Hendrick Hudson Sir Walter Raleigh Indians tattooing a white man Flight of the Indians after the massacre Indians hunting wild buffaloes Captain John Smith Pocahontas Pocahontas interceding for the life of Captain John Smith Captain Smiths fight with an Indian chief Indians making a midnight attack upon the settlers Warrior in costume of the Dog dance John Eliot preaching to the Indians Missionary preaching to the Indians Camp of the Nez Perces Neetmok Chief Sa-tant-ta, Kiowa tribe Chief Ho-wear, Comanche tribe The Mayflower in Plymouth Harbor Treaty between Plymouth Colony and Massasoit The first church in New England Trading with the Indians Squaw and papoose Roger Williams seeking refuge among the Indians Landing of Roger Williams at Providence Indians attacking the house of a white settler The attack on the Doeg wigwam King Philip Attack of the Indians on Brookfield Mrs Rowlandson captured by the Indians William Penn Tree under which Penn signed his treaty with the Indians Arrival of Indian allies at the French camp The escape of the Dustin family Return of the daughter of Eunice Williams Indians attacking Haverhill General Oglethorpe Disastrous defeat of General Braddock A pioneer heros fight with the Indians James Smith and the Indian girls Visit of Pontiac and the Indians to Major Gladwin Pontiac Fierce attack on a block house Andrew Poes famous combat with Big Foot. There may be slight variations in foxing/toning, etc.

Please be sure to add me to your List of Favorite Sellers. Don't miss out on any of my latest listings. NEETMOK BOOKS IS A REGISTERED MEMBER OF EBAYS VERO PROGRAM. When you prepare your listings you generally should use only material text, photographs, etc.

PHOTOS OR OTHER PROPRIETARY INTELLECTUAL PROPERTY IS STRICTLY PROHIBITED AND WILL BE REPORTED TO EBAYS VERO DEPARTMENT FOR IMMEDIATE ACTION. The item "Antique AMERICAN INDIAN WARS 1902 Sioux Apache Kiowa Ute Comanche RARE PHOTOS" is in sale since Wednesday, December 9, 2020.