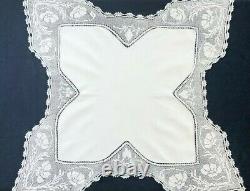 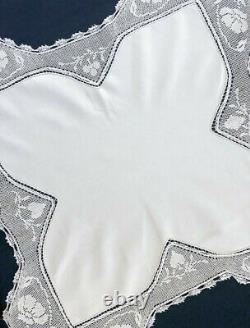 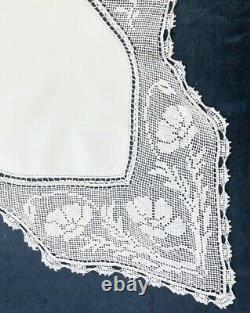 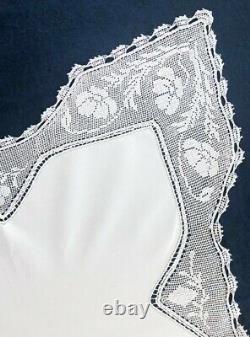 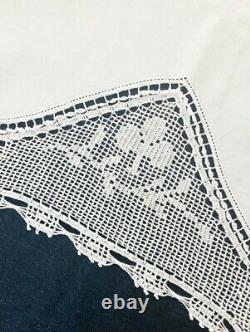 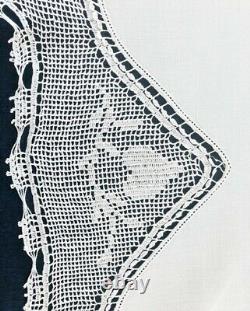 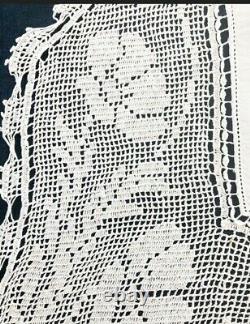 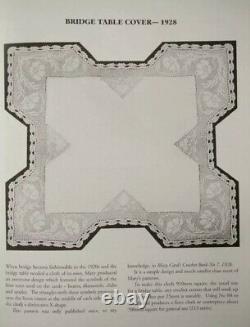 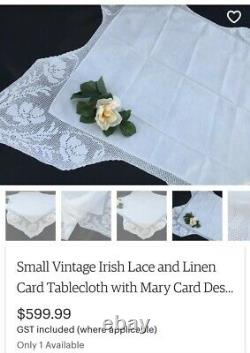 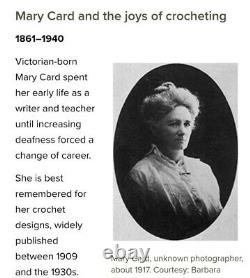 Some may show signs of wear, others may have marks, or odours from age, storage or perfume. Collectors of vintage items would know that this is a part of the vintage charm. Please don't expect vintage items to be in an as "new condition" otherwise you will most likely be disappointed :- Any major flaws, stains or defects will be included in the description. Here is a fabulous and very scarce antique Mary Card design filet crochet lace tablecloth. Very Rare, pattern was only ever published once.

Entitled Bridge Table Cover, a 1928 design from Book 7. Pointing towards the centre is a Heart, Diamond, Club and Spade emblem. It is expertly and very finely worked, snow white with a fine linen centre in an X shape. This tablecloth measures approx 90 x 85 cm.

It is in excellent condition, freshly washed and pressed. There are no faults or repairs, no holes. I have 3 other tablecloth listed both confirmed Mary Card Pieces. Photo 10 shows an simpler version of this tablecloth for sale on Etsy.

Mary was the eldest of a family of ten. About 1873 the family moved to Melbourne where David commenced business in Bourke Street. In 1880 Mary was a student at the National Gallery School of Design. In the late 1880s she wrote a novel, probably never published.

By 1890 she had established a small school in Auburn Road, Hawthorn, and had developed a particular interest in speech training; however by 1903 she had to relinquish it because of increasing deafness. Faced with the need to find an occupation in which her disability was not a handicap, she decided to combine her writing, drawing and needle-work abilities to become a'professional designer and teacher of needlework through the press'. Choosing Irish crochet as her medium, she joined a Ladies' Work Association which undertook repairs of valuable crochet pieces and taught herself to mend old lace.

From these heirlooms she learned the principles of Irish crochet, discovering that she could make new and effective designs to be worked from a chart method of her own invention rather than the usual printed directions. Her first designs were published in the Ladies' Home Journal in the United States of America.

Her patterns became so popular that the editor reprinted many: her first book later Mary Card's Crochet Book No. 1 was published in 1914 and others followed, No. 3 being devoted to Irish crochet. She then developed'giant charts' for more ambitious designs and to cater for workers with failing eyesight, drawn on the scale of ten squares to the inch with a guiding line at every inch. As her popularity grew she no longer had to test all her own patterns but sent them out to be worked by correspondents'on stations in Queensland, in Western Australia.

In lighthouses, at lonely railway gates on the great trunk lines. Wherever a good worker in need of an interest is to be found'. With five books published, Mary went to the U.

Late in 1917 to launch some of her newer designs. In New York, The Mary Card Co. Was set up to reprint her crochet books. Later she settled in England in a studio-cottage at Barkham, Berkshire.

She became steeped in English history and was an authority on ecclesiastical architecture, although she once wrote,'I have had to nail up a placard on my study wall with Advance Australia in big letters just to remind myself that I belong to a pioneer land'. Mary Card revisited Australia occasionally. She died there on 13 October 1940 and was cremated. The item "Antique 1928 Rare White Filet Crochet Mary Card Anemone Bridge Tablecloth Book 7" is in sale since Friday, October 23, 2020. This item is in the category "Antiques\Textiles, Linens\Lace, Crochet, Doilies\Table Cloths". The seller is "cherylb8668" and is located in Morisset, NSW. This item can be shipped worldwide.