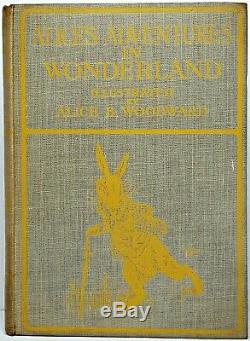 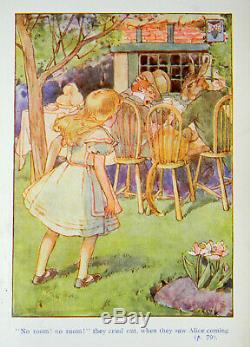 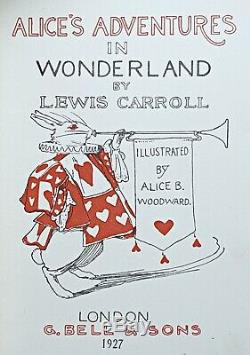 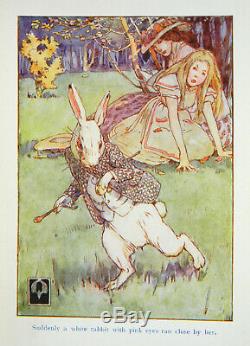 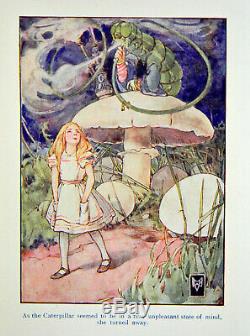 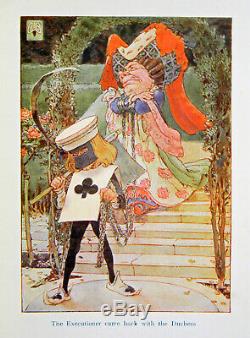 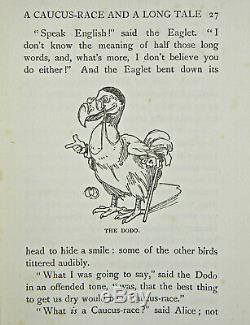 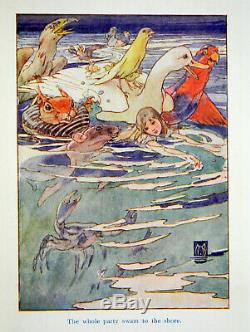 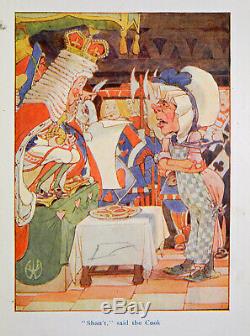 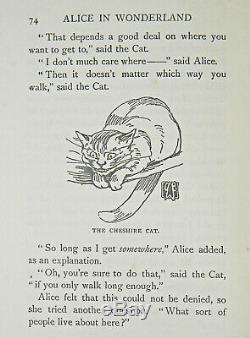 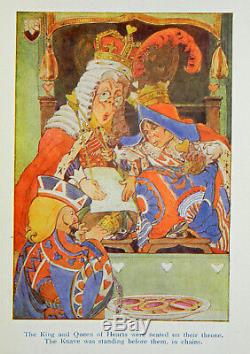 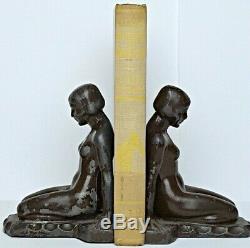 GET IT WHILE YOU CAN!! T his sale is for an original 1927 rare edition of " ALICE'S ADVENTURES IN WONDERLAND " by Lewis Carroll, as illustrated by ALICE B.

She was known as one of the most prolific illustrators of the turn of the 20th century. She is known mainly for her work in children's literature, and secondarily for her scientific illustrations. Her father Henry Woodward, was an eminent scientist and the Keeper of Geology at the Natural History Museum.

As a child, Alice was educated at home by governesses, along with her four sisters and two brothers (she was the fourth of seven). From a young age the children were encouraged to draw, with all of the sisters eventually becoming artists and all of the brothers becoming scientists. By her late teens, Alice was skilled enough to illustrate for her father's lectures and for the papers of his colleagues. To differentiate between her two different kinds of work, she signed all of her illustrations with a butterfly monogram, while in her scientific work she simply wrote her name. She took lessons in illustration from Joseph Pennell and Maurice Greiffenhagen and her connection with Pennell led to commissions from J. Dent and Macmillan and Company to illustrate children's books. She also continued to illustrate for scientific work throughout her career.

From 1907 on, her main publisher was George Bell & Sons for whom she illustrated "The Peter Pan Picture Book" written by Daniel O'Connor, creating 28 coloured plates, Anna Sewell's classic "Black Beauty" and Lewis Carroll's Alice's Adventures in Wonderland. Alice Woodward died in 1951. Her sister, Gertrude Mary Woodward, also worked in anatomical lithography, and was a lifelong friend of Beatrix Potter. ALICE IN WONDERLAND is a work of children's literature by the English mathematician and author, Reverend Charles Lutwidge Dodgson, written under the pseudonym Lewis Carroll.

She grows to gigantic size and shrinks to a fraction of her original height; meets a group of small animals stranded in a sea of her own previously shed tears; gets trapped in the rabbit's house when she enlarges herself again; meets a baby which changes into a pig, and a cat which disappears leaving only his smile behind; goes to a never-ending tea party; goes to the shore and meets a Gryphon and a Mock Turtle; and attends the trial of the Knave of Hearts, who has been accused of stealing tarts. Eventually, Alice wakes up back with her sister.

Published in 1927 , this book is in VERY GOOD CONDITION for its age and especially to be 93 YEARS OLD!!! And firmly bound with no stray markings. It measures 5 1/4" x 7" and is complete with 161 pages. Those of you who follow our auctions know that we specialize in rare.

A search of the internet reveals this to be one of. At the time of this listing so..

Those of you familiar with our store may wonder what we're doing including "ALICE IN WONDERLAND" in our selections? Well, the original manuscript for this classic bedtime story was written right in the middle of the Civil War, in 1862.

This is what ordinary Americans were reading as entertainment at the time. It provided temporary escape and relief from the ravages of the War. Charles Lutwidge Dodgson, was a mathematician and a logician who lectured at Oxford for some 26 years. He was also an accomplished photographer and a Church Deacon. Dodgson's pen name was Lewis Carroll.

This third version was published by Macmillan and Co. In London, on July 4th, 1865. Sir John Tenniel was the artist who agreed to illustrate the revised and expanded text which was now called Alice's Adventures in Wonderland. Tenniel's black and white illustrations were made for the reproductive process known as wood-engraving. Please see our other books too!

The item "ALICE IN WONDERLAND Antique FIRST EDITION Alice's RARE Adventures LEWIS CARROLL" is in sale since Friday, November 1, 2019. This item is in the category "Books\Antiquarian & Collectible". The seller is "rebel_soldier" and is located in Cameron, North Carolina. This item can be shipped worldwide.