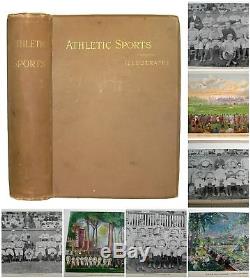 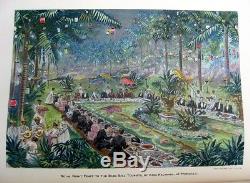 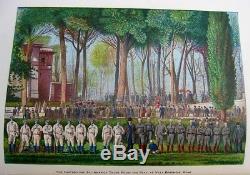 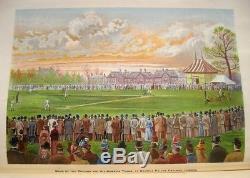 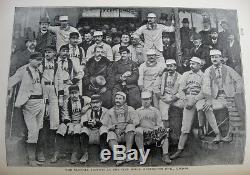 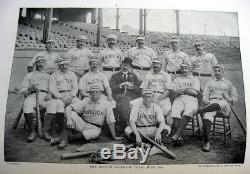 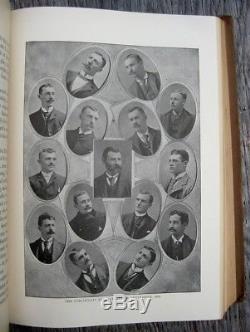 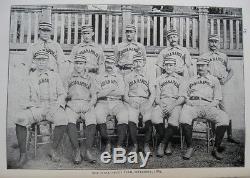 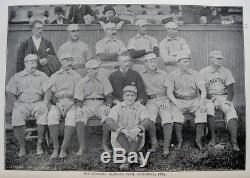 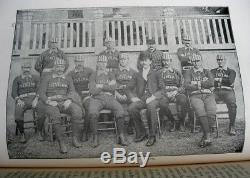 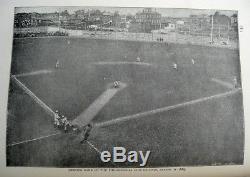 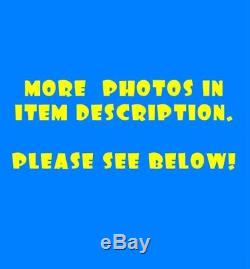 Exterior as shown in photo. Text block firm and solid.

Text is clean and complete. No torn, loose or missing pages.

Handwritten dated inscription on blank prelim. This is the very rare and highly collectible early book on baseball, ATHLETIC SPORTS IN AMERICA, ENGLAND AND AUSTRALIA. Beautifully illustrated with color plates and rare team photos, ATHLETIC SPORTS is primarily a chronicle of the famous world baseball tour of 1888-89 led by former Chicago White Stockings pitching great Albert G. The tour -- which pitted the White Stockings (now the Chicago Cubs) against an American all-star team in a series of exhibition games played in exotic locations around the globe -- is credited with introducing baseball to the world and solidifying the sport as a distinctly American institution and our national pastime. The world tour featured stops in New Zealand, Australia, Ceylon, Egypt, Italy, France, and the United Kingdom. Players on the tour included Cap Anson, John Ward, Ned Hanlon, Jimmy Ryan, Bob Pettit, Marty Sullivan, Fred Pfeffer, Ned Williamson, Tom Burns, Tom Daly, Mark Baldwin, John Tener. George Wood, Fred Carrol, James Fogarty, James Manning, Tom Brown, Billy Earle, Ed Crane, and John Healy. ATHLETIC SPORTS IN AMERICA, ENGLAND AND AUSTRALIA was published in 1889, following the conclusion of the tour in a final game at Chicago. Relatively few copies survive today. In addition to a series of rare full-page black and white American baseball team photos Boston, New York, Brooklyn, Cincinnati, Philadelphia, Cleveland, Pittsburgh and more -- this book also features three of the earliest-known baseball-related color illustrations (the fourth color plate is devoted to cricket). And if a wealth of material on the history of baseball and the world tour of 1888-89 isnt enough, ATHLETIC SPORTS also contains chapters on other field sports popular in America and Europe during the 19th century: cricket, football, lawn tennis, polo, college baseball, cycling, etc. But make no mistake: the primary focus of this book is baseball, especially the first three decades of the game, culminating in Spaldings world baseball tour of 1888-89. The distinctive feature of this work is its chapters on the rise and progress of our national game of base ball, from the time of the organization of the first National Base Ball Association in 1857, to the culminating point of the world-wide reputation it attained as the leading American field sport, which was secured by the grand tour of the civilized world by its greatest professional exemplars in 1888-9.

It is believed that Mr. Harriss sketch of the wonderful progress of the game of baseball will be read with conspicuous interest, because it is the most careful and most complete paper upon that subject ever put into type. Harris acknowledges his indebtedness to Messrs. Rankin, both of the New York Clipper, who placed at his disposal valuable statistics and facts relating to the earlier days of the baseball game. Dont miss this very rare opportunity to own this rare illustrated history of early baseball and the original world series -- Spaldings historic world baseball tour of 1888-89.

Chapter Eleven On to Melbourne, Victoria. Chapter Twelve Melbourne to Adelaide. Chapter Fourteen Back to Melbourne. Chapter Fifteen On the Indian Ocean. Chapter Seventeen Ceylon, with its Strange Sights.

PART NINE THE PRESS AND SPORT Chapter One Influence on the Press on Sport. PART TEN SKETCHES OF BASEBALL WRITERS.

This book is 129 years old. Please be sure to add me to your List of Favorite Sellers. Don't miss out on any of my latest listings. NEETMOK BOOKS IS A REGISTERED MEMBER OF EBAYS VERO PROGRAM. When you prepare your listings you generally should use only material text, photographs, etc.

PHOTOS OR OTHER PROPRIETARY INTELLECTUAL PROPERTY IS STRICTLY PROHIBITED AND WILL BE REPORTED TO EBAYS VERO DEPARTMENT FOR IMMEDIATE ACTION. The item "1889 BASEBALL HISTORY ILLUSTRATED CHICAGO BOSTON NEW YORK BALTIMORE RARE ANTIQUE" is in sale since Tuesday, December 4, 2018. This item is in the category "Books\Antiquarian & Collectible".