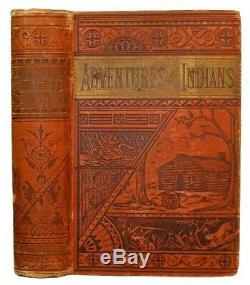 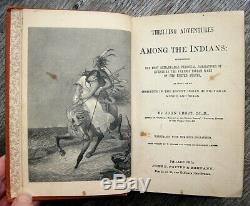 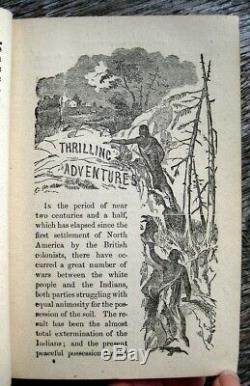 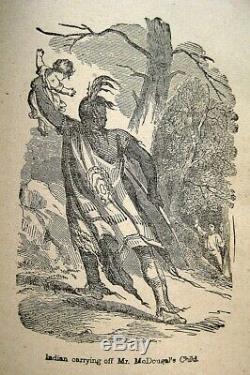 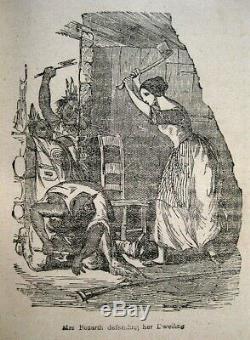 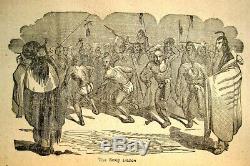 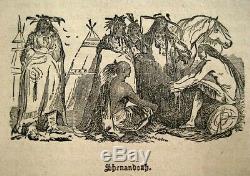 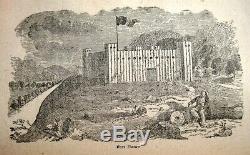 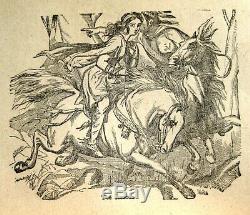 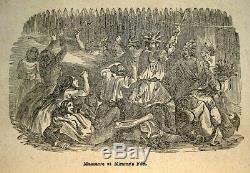 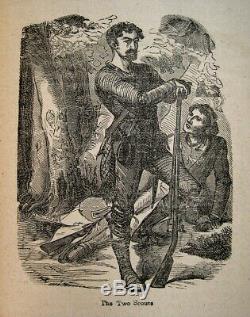 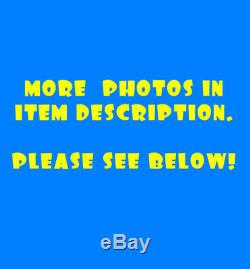 THRILLING ADVENTURES AMONG THE INDIANS: Comprising the Most Remarkable Personal Narratives of Events in the Early Indian Wars, As Well As of Incidents in the Recent Indian Hostilities in Mexico and Texas. Undated, published circa 1880 by John E. Illustrated with Numerous Engravings from Designs by W. Croome and other Distinguished Artists. Exterior as shown in photo.

Text is clean and complete. No torn, loose or missing pages. First published in 1851, this is a rare mid-19th-century collection of selected incidents from the long, often violent history of conflicts between American Indians and the white settlers who usurped their tribal lands.

THRILLING ADVENTURES AMONG THE INDIANS was written by John Frost, one of the most prolific historian authors of the pre-Civil War era. This book features numerous exciting illustrations.

The following narratives have been carefully compiled from a large mass of material which has been accumulated during the many years which the author has devoted to the study of American history. They comprise the incidents which were considered most striking and remarkable, and best calculated to afford the reader an adequate idea of the Indians, their peculiar modes of warfare, and their general character. It is a remarkable fact that the Indians, as a mass, remain now nearly in the same state as they were found by the first discoverers of the New World.

Unless an enlightened public sentiment shall be awakened, and the benevolent exertions of the American people shall be interposed to civilize and reclaim these tribes, there is every reason to fear that they will ultimately become extinct; so that a century hence not a living representative will remain of all the powerful nations which formerly possessed this country. For your convenience, I have personally created a detailed summary of the Contents, followed by a whole bunch of illustrations from the book. I hope you'll take a moment to have a look.

Singular Narrative of the Adventures of Captain Isaac Steward, who probably saw the gold mines of California before 1782. Singular Prowess of a Woman in a Combat with Indians. Thrilling Incidents of Border Warfare in Pennsylvania.

Sufferings of Butler, the American Mazeppa, among the Indians. Daring Feat of a Girl during an Assault by Indians. Courage and Generosity of Pe-ta-la-sha-roo. Noble Action of Lieutenant Beall.

Massacre at Taos, New Mexico, and Death of Governor Bent. Adventures of Colonel Hays with the Indians. Poe's Adventure with two Indians. Captain Reid's Battle with the Lipan Indians. Fight of Colonel Kinney with the Camanche Indians.

Insurrection of the Pueblos in New Mexico. Singular Freak of a Creek Indian. Irruption of the Camanches into Chihuahua. Night Attack by the Pawnees.

Carson's Adventures with the Indians. Battles of American Volunteers with Indians. Indian Cruelty to a Prisoner. Striking Instance of Indian Patriotism.

Personal Encounter with two Indians. The Prophet of the Alleghany. M'Dougal and the Indians. Wanou and the English Officer.

Burning of Hanna's Town. The Lost Sister of Wyoming. Disaster of a Party of Missouri Traders.

Death of Captain Smith, a Santa Fe Trader. Adventure with a Party of Yutas.

Singular Scene in an Indian Council. Narrative of an Escape from the Indians.

Dance of Ojibbeway Indians (in London). Murder of a Family in Tennessee. Fight between the Crow and the Blackfeet Indians. The Sioux, or Dacotas, and their Chief Wahktageli, or Big Soldier. Remember folks, this is an 1880s original.

This book is about 130 years old. Please be sure to add me to your List of Favorite Sellers. Don't miss out on any of my latest listings.

NEETMOK BOOKS IS A REGISTERED MEMBER OF EBAYS VERO PROGRAM. When you prepare your listings you generally should use only material text, photographs, etc. And trademarks/names that you created or own yourself or licensed from the owners. Item description text; lists of contents, lists of illustrations/photos; scanned images, etc. UNAUTHORIZED USE OF ITEM DESCRIPTION TEXT INCLUDING SUMMARIES OF CONTENTS, ILLUSTRATIONS, ETC. PHOTOS OR OTHER PROPRIETARY INTELLECTUAL PROPERTY IS STRICTLY PROHIBITED AND WILL BE REPORTED TO EBAYS VERO DEPARTMENT FOR IMMEDIATE ACTION. The item "1880 INDIAN WARS ANTIQUE ILLUSTRATED FRONTIER BATTLES MASSACRES OHIO RIVER RARE" is in sale since Friday, April 17, 2020. This item is in the category "Books\Antiquarian & Collectible". The seller is "neetmok" and is located in South Salem, New York.