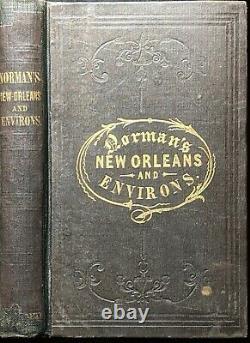 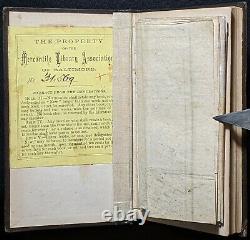 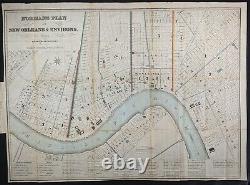 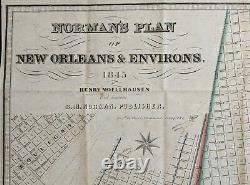 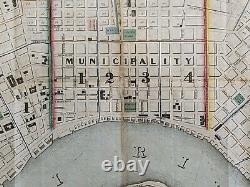 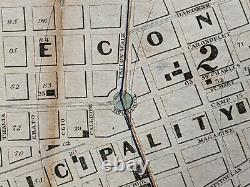 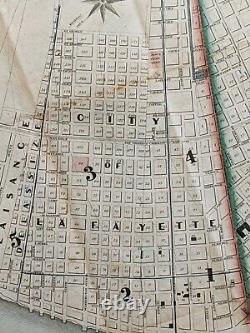 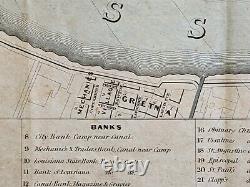 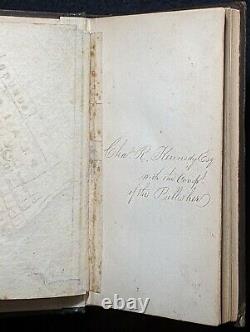 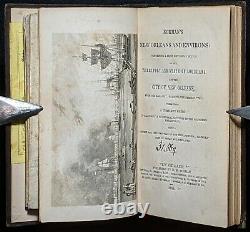 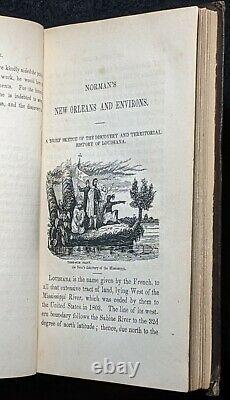 DEDICATED TO THE CITIZENS OF NEW ORLEANS, WITH True Sentiments of Respect, BY THEIR HUMBLE SERVANT, The Publisher. NORMAN'S NEW ORLEANS AND ENVIRONS: CONTAINING A BRIEF HISTORICAL SKETCH OF THE TERRITORY AND STATE OF LOUISIANA, AND THE CITY OF NEW ORLEANS, FROM THE EARLIEST PERIOD TO THE PRESENT TIME: PRESENTING A COMPLETE GUIDE TO ALL SUBJECTS OF GENERAL INTEREST IN THE SOUTHERN METROPOLIS; WITH A CORRECT AND IMPROVED PLAN OF THE CITY, PICTORIAL ILLUSTRATIONS OF PUBLIC BUILDINGS, ETC. NEW ORLEANS: PUBLISHED BY B. LOUIS, HALSALL & COLLET; MOBILE, J. Van Norden, Printer, 39 William street, 1845.

Front flyleaf bearing inscription: Chas. Kennedy was a native of Philadelphia, but in his youthful days came to New Orleans and during his residence here was connected with a number of different enterprises; sugar refining and the calling of a commission merchant being his chief occupations.

He amassed a fine fortune, in which respect he did not differ from his relatives, the male members of which were principally professional men, and used his wealth wisely and well. He was a man of magnificent physique, and when a young man he became the owner of some ocean vessels noted for their great sailing powers, on which he sailed as skipper to many foreign climes. Besides his native tongue he spoke Spanish and Italian fluently, and until his death, which occurred March 19, 1861, at about the age of fifty years, he was connected with foreign trade to a certain extent.

He was a Chesterfield in deportment and his genial and courteous manners won him an extended circle of friends. Biographical and Historical Memoirs of Louisiana, 1892. 223 pages, frontispiece: NEW ORLEANS, illus. Maps, [4] pages publisher's advertisements, [6] blank leaves for MEMORANDA at rear.

Original cloth stamped in gilt and blind; old restoration to spine, joints; hinges strengthened with archival tape; upper pastedown bearing institutional bookplate: Mercantile Library Association of Baltimore ; call number penned to title-page, couple embossed stamps, else textblock clear and unmarked. This copy with its original folding map , 18" x 24 1/4", tipped-in: "Norman's Plan of New Orleans & Environs" by Henry Moellhausen, engraved by Shields & Hammond. Recent conservation; toning at folds, otherwise a well preserved example, rarely found accompanying the book. Norman's fine plan of the quickly growing city noted the governmental change in New Orleans. In 1836, due to constant disagreements between Creoles and Americans, the state legislature dissolved the city's existing municipal government and divided it into three autonomous municipalities. Once a year, the general council, composed of aldermen from each municipality, met with the mayor to deal with city-wide issues, such as the prison, debts, and licenses. Finally, in 1852, authorities abolished the cumbersome system and reinstated a single municipal government.

This map shows the former town of Lafayette. Americans controlled both it and the city's Second Municipality at this time, while the city's French-speaking Creoles ruled the downriver First and Third Municipalities.

Five Hundred Years of Maps #180 Norman's New Orleans and Environs was written for visitors to New Orleans and those who were just curious about the city. The conservatism of Norman's claims for his adopted city was unusual for a city guidebook, as most of them tended to exaggerate. The author claimed that crime was at a low rate, ignored poverty, defended climate and slavery, and hardly mentioned vice and mosquitoes... According to Norman, New Orleans had a colorful social life. He describes the holiday mood of the city with its rounds of balls, masquerades, soirées, and parties. All modes of entertainment were available, from opera to street serenaders, from high drama to puppets... Admitting that the level terrain of New Orleans restricts the variety of scenery, Norman suggests a six-mile ride to Carrollton, describing the place as a pleasant resort where one may stroll through extensive public gardens.

Another six-mile ride is along the old shell road on the banks of the New Basin Canal. Halfway to Lake Pontchartrain the visitor could find the'highly celebrated Metairie race track. " - Bound to Please #49; HOWES N180; JUMONVILLE 1412, "Not a New Orleans imprint. The item "1845 1ST ED INSCRIBED NORMAN'S NEW ORLEANS AND ENVIRONS With RARE MAP ILLUSTRATED" is in sale since Saturday, November 21, 2020. This item is in the category "Books\Antiquarian & Collectible".

The seller is "504antiquariyat" and is located in Gretna, Louisiana. This item can be shipped to United States.